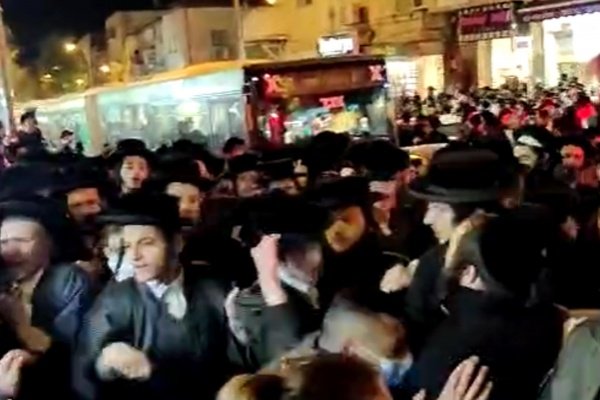 In their collective effort towards rallying against the sale of non-Kosher phones at a cellular phone store in Geula, on Sunday evening, six more members of the Toldos Avraham Yitzchak sect were arrested, and several others were bombarded with water canyons.

During Sunday’s gathering, things took a violent turn as Chasidim shattered the storefront’s glass, and some of the assembled protesters succeeded in bypassing police and breaking open the door of the store. Six protesters were arrested and traffic was backed up on Malchei Israel street as police dispersed the demonstration.

Over the past few weeks, demonstrators have tirelessly struggled against three stores selling non-kosher phones in the Geula neighborhood. While speaking to local media, the protesters explained that they simply wish to prevent their children from being exposed to the internet. “Those who want to sell non-kosher phones can do so on Jaffa street, we don’t know why they come to our neighborhood. We’re not demonstrating against all stores in Jerusalem.”

After the Sunday incident, Israeli police released an official statement saying, “a short time after the beginning of protests at the site, tens of rioters began creating a public disturbance and blocking the street. Later they caused damage to a store, attacked police, and damaged a police van. After police told them to disperse and they continued to demonstrate, police arrested three suspects for allegedly causing damage and public disturbance. Two policemen were lightly injured and received treatment at the scene.”