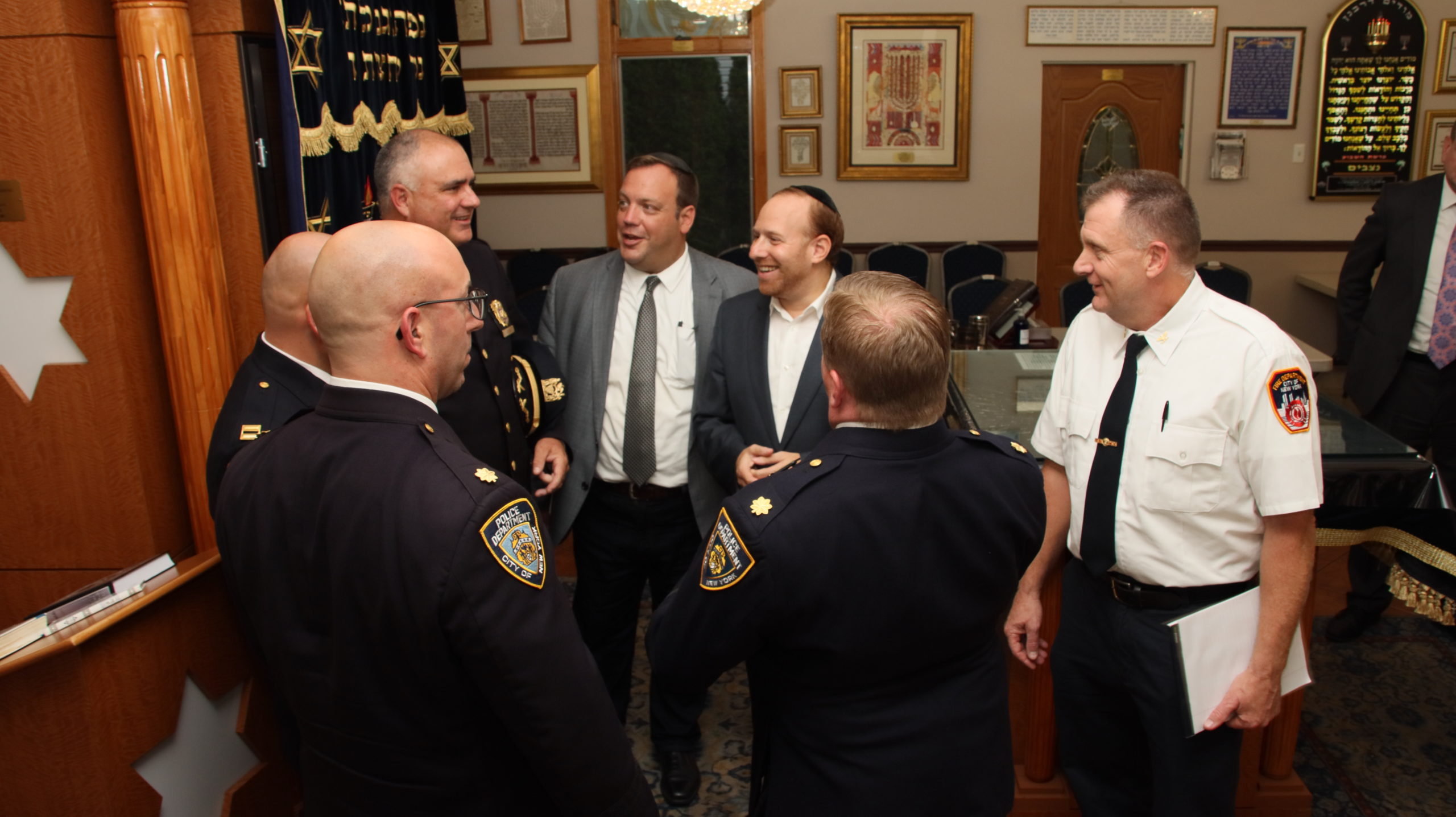 On Monday, August 30, 2021, 6 PM at the Aur Torah Sephardic Congregation, located in the New Springville section of Staten Island, the Council of Jewish Organizations of Staten Island, (COJO-SI) and its Security Committee held its Annual Pre-Rosh-Hashanah Security Meeting.

At the meeting, the focus was on how to better secure Synagogues and Houses of Worship for the High Holiday Period when larger than ordinary crowds attend Synagogues all over.

Rabbi Aaron Zeev, Spiritual Leader of Aur Torah opened the program with an Invocation, “thanking the police for their dedicated service throughout the pandemic.” Rabbi Zeev made special emphasis that, “thanks to the dedication of the NYPD we will get through these hard times and challenges and will have a successful transition back to a normal world.” Rabbi Yaakov Wasser, the newly appointed head of school at the Jewish Foundation School remarked, “in my short time in Staten Island I have noticed the great collaboration between COJO and the NYPD and this relationship, thank you Ari Weiss who is always available in bringing the NYPD and Community together by providing the community the comfort to know that our safety and security needs are taken seriously.”

Chief Vega commented that “COJO’s constant and consistent ability in taking the lead with all the diverse communities in Staten Island is a tremendous asset in helping to open important and sometimes tough and difficult dialogue. These conversations help ease tensions and helps in building friendships, trust and bonds between all of Staten Island that will live on after the pandemic has become history. The key is the COJO leadership team of Mendy Mirocznik, Scott Maurer and Ari Weiss who will do whatever is needed and necessary in keeping the lines of communication strong and open. This is just another example how working together with organizations such as COJO and Shomrim makes a true difference.”

Mendy Mirocznik, President of COJO closed the meeting by thanking Rabbi Aaron Zeev, Oshri Reuven, President of Aur Torah and Iva Reuven, COJO Service Committee Chair for sponsoring and hosting the Annual Pre Rosh-HaShanah Security Meeting. Mirocznik further thanked  NYPD Chief Vega, FDNY Chief Harris, and MTA Police commander Captain Dominici MTA Police Sgt. Robert Schnable and the NYPD Pct. Commanders for taking the time from their busy schedules in addressing community security needs. “It is only through dialog and keeping the conversation strong we will continue in building a strong partnership that will be able to address and tackle any situation that will arise. I dare say that we are blessed in Staten Island in having such wonderful public servants working in the police and fire departments. Gentelmen we thank you and your officers for their heroism and dedication. I know that the best is still yet to come.”