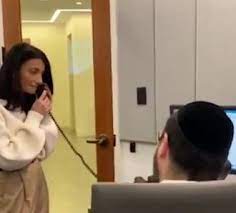 On Tuesday, a visit by City Councilwoman Inna Vernikov to the central Hatzalah headquarters in Borough Park turned out to be largely miraculous as the newly elected councilmember helped save a life with her translation skills.

While on her visit to the headquarters of Central Hatzalah, when Verbikov was touring the facility’s dispatching operations, a call came in, and there was no one who could understand the woman since she was speaking in Russian.

Luckily enough, Vernikov, who is well-versed in the language instantly attended the call and helped translate it to the Hatzalah members for immediate assistance.

“I am beyond grateful to have been in the right place at the right time when a Russian speaker called Hatzalah during a tour of their headquarters,” Councilwoman Vernikov said in statement to Yid Info “What an amazing feeling to be able to take a small part in the Godly work that Hatzala does every day in saving people’s lives.”

Following the incident, the Chevra Hatzalah praised Vernikov for her assistance, which saved the time-consuming process of locating a Russian translator and allowed them to provide faster service to the patient. They released an official statement saying, “We are tremendously grateful for Councilwoman Vernikov’s support of Chevra Hatzalah and glad she was able to step in and provide assistance during a critical emergency. We look forward to working together to help better serve our community.”

“There is a button that the dispatcher can push for multiple languages – it puts him in contact with a person who is available to talk in these languages,” Hatzalah CEO Rabbi Yehiel Kalish says, when a caller doesn’t understand English.

Inna Vernikov is a Jewish-Ukrainian attorney and politician who is the New York City Council Member for the 48th district.