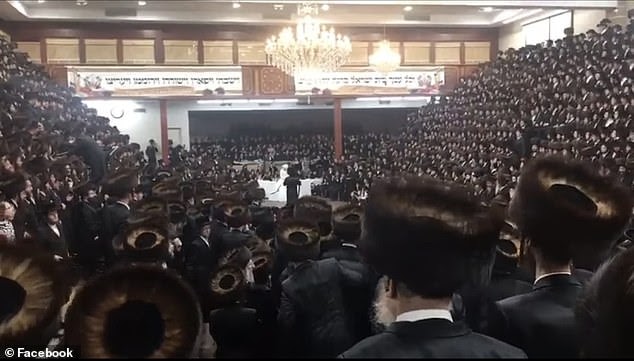 On Sunday, New York Governor Andrew Cuomo slammed a Hasidic wedding held at a Brooklyn synagogue, deeming it to be ‘disrespectful’- following a video of numerous gatherers attending the wedding was seen online. Claiming the wedding to have violated restrictions, Cuomo threatened legal action over the “secret wedding”.

Known to have selectively targeted the Jewish community in New York time and again, Cuomo took a jab at the Satmar wedding, saying, “It was a blatant disregard of the law. It’s illegal. It was also disrespectful to the people of New York. The law protects everybody. It protects you, but it also protects me”

As reported by the New York post, the wedding held inside the Yetev Lev temple in Williamsburg had been planned in “secret”, with only word of mouth invitations. The video of the alleged secret wedding was also floated on the portal. The footage which was first spotted in the Yiddish newspaper Der Blatt, shows crowds of attendees without masks, cramped together in a large room. They had come to celebrate the wedding of Yoel Teitelbaum, the grandson of Satmar Grand Rabbi Aaron Teitelman.

Calling for a robust investigation to go underway, Cuomo sounded a warning for the community, and the wedding, saying, “They should investigate, and if 7,000 people were at a wedding, I’m sure they’ll be able to figure it out, and then we’ll bring the full consequences of legal action to bear. That’s the problem with a ‘secret’ 7,000. It’s hard to keep a secret,” Meanwhile, with respect to the November 8th wedding, an investigation was already promoted by Mayor Bill de Blasio.

City Hall spokeswoman Avery Cohen confirmed the administration is investigating, saying, “The City is conducting an investigation into the incident and will hold those accountable to the fullest extent of the law.”

Going ahead, Cuomo drew attention to another influential wedding last month which was planned for the grandson of Satmar Grand Rabbi Zalman Teitelbaum and was expected to see over 10,000 people attend it (although the organizers claimed otherwise). Upon the mandate of the State to cancel the wedding, the family complied and was yet scrutinized throughout the event. Trying to pinpoint at the violations and alleging that the Orthodox community held the recent wedding in spate, Cuomo said “If it turns out that, because we stopped that wedding, the reaction was, ‘well we’ll have a secret wedding,’ that would be really shocking and totally deceitful from the conversations that I had because I had personal conversations with members of the community.”

Cuomo’s comments at the Midtown conference have been deemed as downright biased, considering he showed no sense of concern or fury over the widespread demonstrations staged in New York on the night following Joe Biden’s victory in the 2020 Presidential Elections.