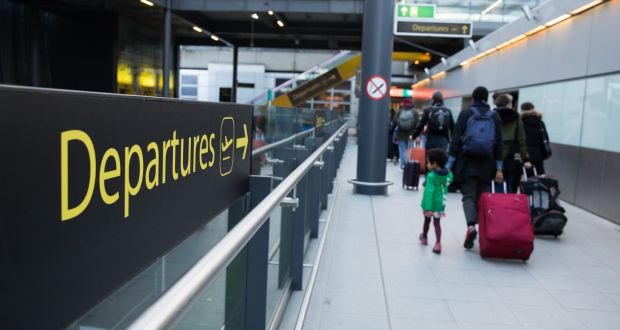 Slamming the government for not taking any action regarding the influx of travelers from London to the JFK airport in the wake of the deadly new strain of the virus, Governor Andrew Cuomo claimed on Sunday, that the new variant was most likely already on a flight to JFK due to a lack of national response from U.S. federal officials.

As numerous countries including Israel have banned travel from the UK due to a new, potentially lethal strain of the coronavirus that has shut the nation down, New York Governor Andrew Cuomo on Sunday, slammed the US Government for not following the same safety measures.

“Right now, this variant in the UK is getting on a plane and flying to JFK,” Cuomo said in a call to reporters on Sunday. The mutation that has been warned about by UK Prime Minister Boris Johnson has warned could be 70 percent more transmittable. Cases of coronavirus have doubled in London in the past week, with the new virus variant accounting for 60 percent of new infections, the prime minister’s spokesperson said.

“There’s a disturbing story coming out of the U.K. with this new variant of the virus, which according to Boris Johnson is 70 percent more transmissible,” Cuomo warned. Currently, there are six daily flights into New York from the U.K. and all it takes is one person” the governor stressed, calling for the US government to impose coronavirus testing of UK travelers at a “minimum,” if not an outright ban similar to countries like Saudi Arabia, Israel, India, France, Germany, Italy, the Netherlands, Belgium, Austria, Ireland, and Bulgaria.

“We have about six flights a day coming in from the UK. And we have done absolutely nothing. To me, this is reprehensible, because this is what happens in the spring,” he said, blaming New York’s wild early spread of the contagion on travelers from Europe, rather than directly from the initial epicenter in Wuhan, China. Some “120 countries require testing, we don’t. Other European countries have done a ban, we haven’t. And today that variant is getting on a plane and landing at JFK,” Cuomo stressed.

Cuomo also added that so far “we do not have any evidence” that the new strain has reached the US. On the other hand, Health Commissioner Dr. Howard Zucker confirmed late Sunday that the latest variant of the virus has not yet been detected in New York. Meanwhile,  US Assistant Secretary for Health Admiral Brett Giroir told ABC, “I don’t think there should be any reason for alarm right now. Viruses mutate. We’ve seen almost 4,000 different mutations among this virus. There is no indication that the mutation right now that they’re talking about is overcoming England. And, very importantly, we have not seen a single mutation yet that would make it evade the vaccine.”

As of Sunday, Cuomo also announced the state has another 9,957 COVID-19 cases and a positive rate of 5.05 percent. The number of New Yorkers hospitalized with coronavirus rose to its highest level since mid-May on Saturday: 6,208. That number dipped slightly on Sunday, dropping to 6,185. The state on Sunday also reported 123 new deaths.