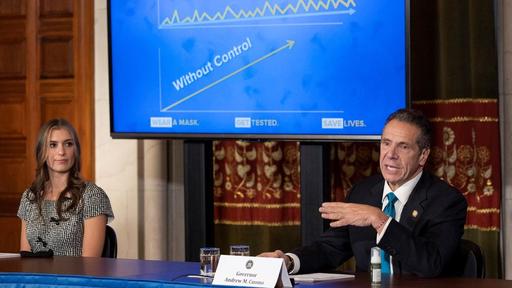 As a possible second wave lurks around the corner amidst the holiday season, NYC Governor Cuomo has once again burdened businesses in the Big Apple with restrictions that will impose a 10 pm curfew on restaurants, bars, and gyms statewide, beginning Friday.

Apart from announcing the curfew, Cuomo also introduced new restrictions on businesses and social events on Staten Island and brought in a new 10-person cap on parties and other gatherings in private residences, including apartments and houses. The new rules are set to go under effect starting Friday, 10 PM.

“If these measures aren’t sufficient to reduce the spread, we’ll turn the valve more and part of that would be reducing the number of people indoor dining,” Cuomo said while addressing the media during a Veterans Day press briefing on Wednesday. “If that doesn’t work, if these numbers keep going crazy … you will go back to a closedown,” he added. He claimed that if all else fails, the city would have to go back to closing down indoor dining at bars and restaurants, which will come as a massive blow to the already bruised NY economy.

Taking a dig at the lack of NYPD personnel deployment sanctioned by Mayor Bill de Blasio to ensure the enforcement of the new rules, Cuomo said “I think this should be a relatively simple activity because what’s the alternative? We’re going to run New York City without the NYPD? Doesn’t work! Doesn’t work on any level. One hundred and fifty sheriffs are going to substitute for 33,000 NYPD? Doesn’t work. It is an impossible situation.”

According to the new clampdown, restaurants and diners will have to clear customers out by 10 p.m. However, their kitchens can remain open for takeout and delivery.

The new set of rules came after the state reported a high-standing 2.9 percent of tests that came back positive Tuesday. Furthermore, in the five boroughs, cases continue to escalate. Figures from the city Health Department show that the average positivity rate for coronavirus tests taken over the last seven days has climbed to 2.52 percent — the highest rate since the Big Apple recorded a 2.61 percent positivity rate on June 9.