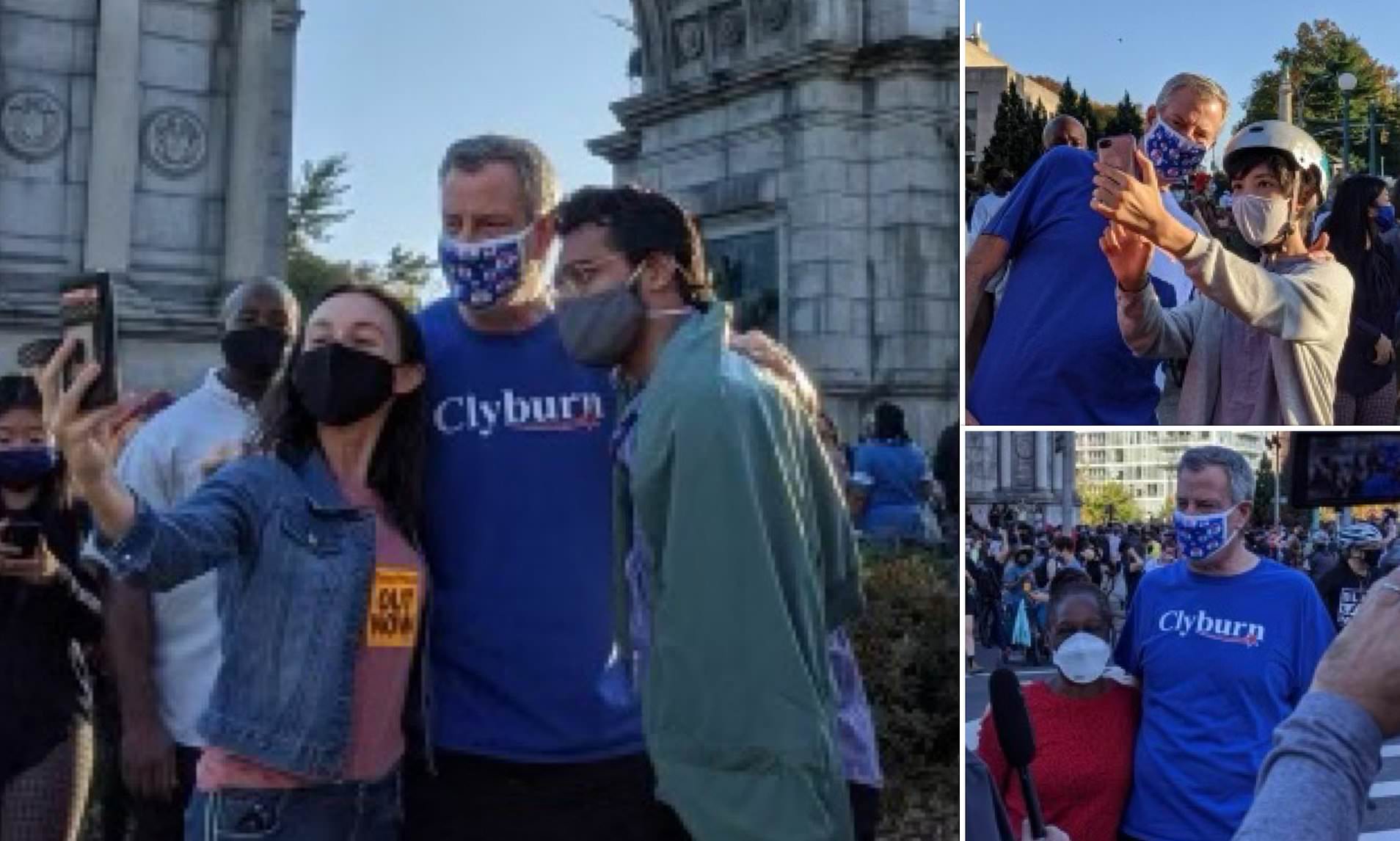 Drawing criticism for his disregard for social distancing on Saturday, ironically just after he launched a social distancing app for New Yorkers, Mayor Bill de Blasio was seen clicking selfies with supporters in a mass event that was held in celebration of former Joe Biden’s victory over President Trump.

Several mass gatherings and celebrations over Joe Biden’s victory laced the New York City landscape over the weekend, some included gatherers wearing masks, and some didn’t. This being said, social distancing went for a toss, and the Mayor’s office had nothing to say in return. Mayor Bill de Blasio, was himself seen clicking selfies with Democratic supporters, surrounded by crowds in celebration of the win. Known to have strongly condemned orthodox Jewish communities for their religious gatherings over the past few months, this act of hypocrisy came after the honcho himself announced a smartphone app for residents who wanted to report violations of social distancing to authorities. At the time, it was the nation’s largest COVID-19 hotspot. He also imposed fines on violators of up to $500.

Earlier this year, de Blasio had instructed the NYPD to deter people from attending a Jewish funeral, claiming, “Something absolutely unacceptable happened in Williamsburg tonite: a large funeral gathering in the middle of this pandemic. When I heard, I went there myself to ensure the crowd was dispersed.”

As opposed to this reaction, de Blasio failed to condemn the gatherings that occurred throughout the weekend at several pockets of the Big Apple including Times Square, Fort Greene Park, Harlem, and several outdoor diners, among others.

On the other hand, numerous other Mayors around the nation, warned citizens of the COVID risks whilst gathering in celebration, urging them to wear masks and practice social distancing. Atlanta’s Keisha Lance Bottoms, Portland’s Ted Wheeler and Los Angeles’ Eric Garcetti on Twitter urged residents to put their masks on and practice other health precautions in crowds.

Making another case for double standards, New York City Health Committee Chair Mark D. Levine on Saturday cheered a large crowd of New Yorkers celebrating Joe Biden’s presidential victory, but a day later warned that the city was in the midst of a “2nd wave” of the coronavirus pandemic with cases and hospitalizations piling up. Posting a video of celebrations after the Biden win, Levine tweeted, “An emotional crowd in Times Square watching @jbiden & @KamalaHarris make history as Pres- & VP-elect,” Levine tweeted Saturday night. “Chants of ‘USA! USA!’”

But, less than a day later, Levine hinted at the risk of a second wave of the coronavirus, tweeting “Cases, positivity, hospitalizations are all increasingly sharply,” Levine tweeted, adding: “It’s time to start rallying New Yorkers—again—to flatten the curve.”

As of now, New York is seeing a sharp rise in cases with positive rates mirroring the ones in June this year.