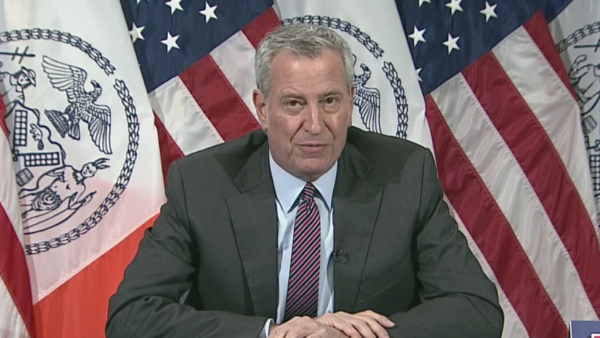 Along with placing new quarantine plans for those traveling to New York, Mayor Bill de Blasio advised New Yorkers to not venture out of the state, so as to curb the spread of the virus during the upcoming holiday season.

Battling another uptick in cases, Mayor Bill de Blasio urged residents to avoid traveling out of state during the holidays for any reason whatsoever, warning that too much movement could lead to a spike in COVID-19 cases.

As reported by The Journal News, the Mayor said in a briefing on Tuesday, “We have a real threat of a second wave here in New York City, and we’ve been fighting it back, but we can’t take it lightly.” New York’s first wave of infections earlier this year, had wreaked havoc on the city with nearly 24,000 confirmed and probable COVID deaths, making it an epicenter of the infections, with the highest count surpassing the rest of the country.

Stressing upon the urgency of the announcement, de Blasio added, “So, most importantly, I want to recommend to all New Yorkers, it’s not business as usual. I hate to say it, but I have to urge all New Yorkers, do not travel out of state for the holidays.”

In response to another uptick in cases over the past three weeks, New York has tightened its restrictions on social distancing and mask-wearing, to ensure that the spread of the virus is controlled. Apart from these measures, on Tuesday the Mayor also cautioned about traveling outside the state, including to neighboring states where infection rates have also grown.

“To the extent travel among the states or between the states is not essential, it should be avoided,” Cuomo said referring to his quarantine plan that has been in place since June. According to this plan, travelers coming from 41 states and territories to undergo a 14-day self-quarantine upon arrival to New York, including the three most populous states in the country — California, Florida, and Texas.

Furthermore, in an interview with host Andy Cohen, Cuomo said he would “play it safe” for the holidays. “I would be safe, I really would,” Cuomo said. “I talked to my mother about it yesterday. I think it’s a mistake to get casual and to get cocky. Look, if everybody got a test within 24 hours, 48 hours, that’s sort of the best you can do. But even that’s not a guarantee because you could have picked it up since you got a test.”

De Blasio said New Yorkers should especially not travel to states or countries with high infection rates and encouraged those who return to New York to get tested for COVID and abide by the quarantine order. He further added that the city has also prepped for COVID testing at its airports for arrivals.