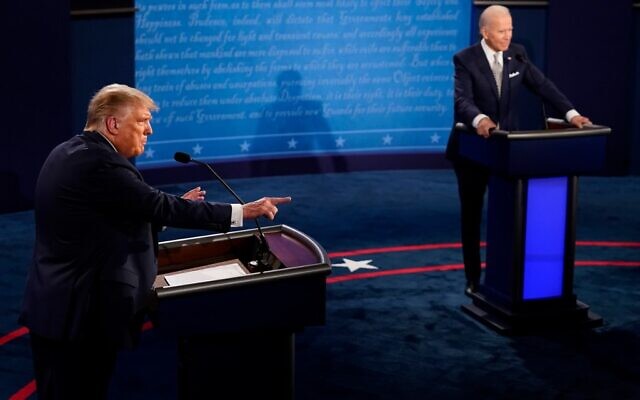 After the first presidential debate which turned out to be nothing short of chaotic as both candidates displayed a raucous stance in presenting their arguments, the debate commission of the second and final showdown before the presidential elections on November 3rd has decided to mute microphones to allow each candidate the opportunity for uninterrupted remarks.

On Thursday this week, President Donald Trump and Democrat Joe Biden will have their microphones cut off while their rival delivers their opening two-minute answer to each of the debate topics.

The framework of the second, 90-minute debate is divided into six 15-minute segments, with each candidate granted two minutes to deliver uninterrupted remarks before proceeding to an open debate.

This being said, the open discussion portion of the debate will not feature a mute button, but interruptions by either candidate will count toward their time.n a statement, the commission said it “had determined that it is appropriate to adopt measures intended to promote adherence to agreed-upon rules and inappropriate to make changes to those rules.”

Under usual circumstances, there would have been 3 presidential debates between the two candidates, as is the custom. Although, this year, President Trump contracting the Coronavirus two weeks ago led to the second debate being scrapped. Instead, the two candidates held dueling town halls to make up for the opportunity missed.

“President Trump is committed to debating Joe Biden regardless of last-minute rule changes from the biased commission in their latest attempt to provide an advantage to their favored candidate,” Stepien said in a statement.

The final 90-minute debate between Trump and Biden will take place on Thursday in Nashville, Tennessee, and moderated by Kristen Welker of NBC News at 9 p.m. Eastern Time.