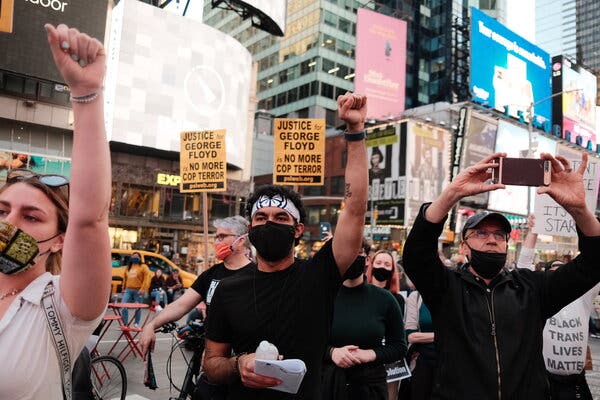 Taking to the streets to celebrate the newly-announced justice for George Floyd, a barrage of New Yorkers swarmed across the city on Tuesday evening- with no media outlet shunning them for dismantling COVID protocol.

Giving a free pass to Floyd supporters in gathering in large numbers (whereas the same is always criticized when it comes to the Jewish community residing in the city), a blind eye was turned towards those who were celebrating the guilty verdict of Derek Chauvin, the cop who murdered George Floyd. What was supposed to be a quiet, at home, and even virtual celebration of justice was converted into a street demonstration in New York- which unsurprisingly enough- no one condemned.

Amidst a still pandemic-gripped New York city were hundreds who made their way to the Barclays Center in the aftermath of the decision on Tuesday evening. Hours later, multiple marches were on the move throughout the city, with some protesters coming over the Manhattan Bridge from Brooklyn and others walking from Times Square to Washington Square Park.

Usually standing against large gatherings, New Yorks lawmakers kept mum, whilst Mayoral candidate Maya Wiley even spoke to the crowd at Barclays, telling them, “This verdict is a moment of justice for the nation — what we do next is up to us.” The group, which then grew to about a thousand, then marched through Downtown Brooklyn to and over the Manhattan Bridge, chanting “One nation, abolition” and “Can’t bring justice. Only revolution.”

Meanwhile, dozens of protestors gathered at the Adam Clayton Powell Jr. State Office Building in Harlem — and broke out into ecstatic cheers of “Black Lives Matter” when the verdict was read, according to a video on social media. Hundreds of people were also in Union Square when the decision came down. Black Lives Matter Greater New York co-founder Hawk Newsome addressed a crowd of protesters, leading them in a chant of “Power to the people!,” his fist raised in the air.

The hypocrisy of New York’s lawmakers is all the more evident with last night’s protests and demonstrations since the same is never taken into consideration when it comes to Jewish communities.