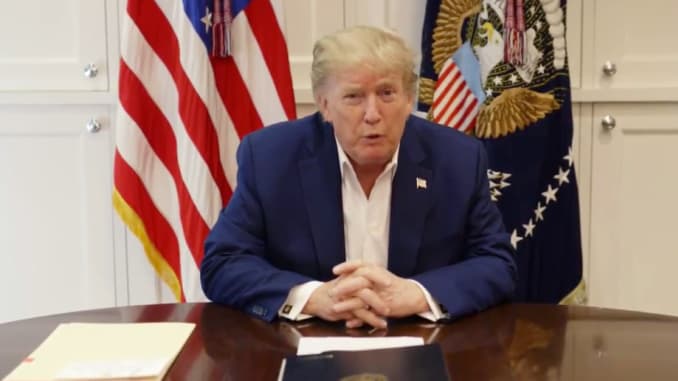 Doctors Hint Speedy Recovery For The President, As Soon As Today

In an update about President Donald Trump’s medical condition after being diagnosed with the coronavirus on Thursday, last week, the medical staff at Walter Reed National Military Medical Center has suggested that the President has seen a speedy recovery, and may return to the White House as soon as today.

Over the weekend, President Trump continued to brace himself against the fight against coronavirus, after he and his wife tested positive last week. Admitted to a special ward at the Walter Reed National Military Medical Center, the President continued to work and assure Americans that he was doing well, via a series of Tweets and photos.

Administering a combined drug treatment using dexamethasone and Remdesivir, doctors gave an update regarding the President’s health condition on Sunday, after which he made a short, surprise appearance in a short drive where he greeted all his fans for lending their support.

In his address to the press, Dr. Sean Conley informed that President Trump has experienced two episodes of transient drops in oxygen levels. From Thursday into Friday morning, Conley said Trump was doing well with mild symptoms and oxygen levels in the high 90s. By later Friday morning, the president had a high fever and his oxygen levels began dipping below 94%. In response to this, Conley recommended and administered an hour-long supplemental oxygen treatment due to concerns about the possible rapid progression of the disease. In response to transient low oxygen levels, the president also has begun dexamethasone therapy and was given his first dose Saturday, along with a 5-day Remdesivir treatment.

“He began showing milder symptoms and began moving about his residence at the White House, but, despite these improvements, the medical team determined the best course of action was to transfer Trump to Walter Reed in Bethesda, Md., by Friday afternoon for a more thorough evaluation and monitoring,” detailed Dr. Conley.

Dr. Sean Dooley, a pulmonologist at Walter Reed, said on Sunday, “the President has remained without a fever since Friday morning and his cardiac, kidney and liver functions are all still normal.” He also said Trump has not shown signs of shortness of breath and was walking around his medical unit without limitation or disability.

Dr. Garibaldi, who works at the Johns Hopkins Hospital in Baltimore said, “if he continues to look and feel as well as he does today, our hope is that we can plan for discharge as early as tomorrow to the White House where he can continue his treatment course.”

Meanwhile, leaders from all over the world have wished President Trump a speedy recovery, some of whom include Indian PM Narendra Modi, UK Pm Boris Johnson, WHO Chief Tedros Adhanom Ghebreyesus, German Chancellor Angela Merkel, and more.