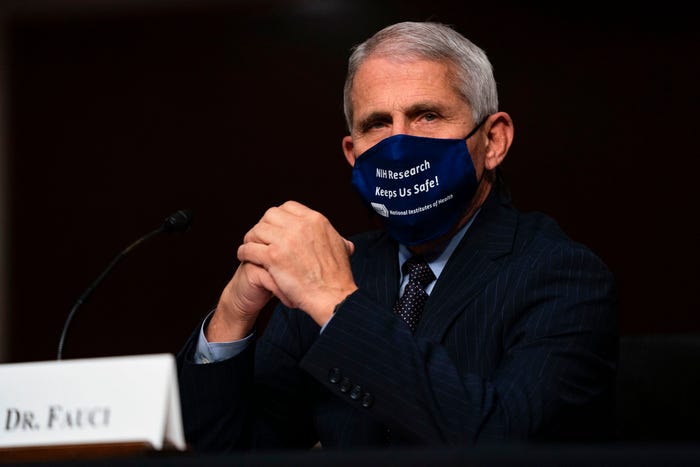 Dr. Fauci Advises Americans Not To Worry About Vaccines, Deems Them Safe

Amidst several conspiracy theories floating in the nation about the vaccines being hurriedly brought out, White House Coronavirus Task Force’s Dr. Anthony Fauci called on Americans on Thursday, to “put to rest” theories that an FDA-approved coronavirus vaccine might be unsafe.

After several people, including New York Governor Andrew Cuomo trying to throw mud at the Trump administrations for allegedly unsafe and rushed vaccines, Dr. Anthony Fauci assured the public that a prospective coronavirus vaccine, be it from Moderna, Pfizer or any other pharmaceutical company would be safe and effective. He also called for people not to believe in the theories and baseless claims stating that the development was rushed for political purposes.

In his statement at the press briefing, Fauci said, “The process of the speed did not compromise at all safety, nor did it compromise scientific integrity. It was a reflection of the extraordinary scientific advances in these types of vaccines, which allowed us to do it in months that actually took years before. So I really want to settle that concern that people have about that,” he said, calling the Pfizer and Moderna vaccines “really solid.”

The statement came with reference to Pfizer suddenly making the second announcement within a week, claiming that their vaccine candidate is 95% effective, as opposed to Moderna, which stands at a 94.5% efficacy.

Fauci also assured that “An independent body of people who have no allegiance to anyone– not the administration, not to me, not to the companies, looked at the data and deemed it to be sound.”

Fauci also said people in high priority groups could expect to begin getting vaccinated by the end of  December.

Advising Americans not to lower their guard, he added, “help is on the way” but warned the public to wear a mask and stay socially distant until they are able to be widely distributed starting with the first vaccinations at the end of December.

“If you’re fighting a battle and the cavalry is on the way, you don’t stop shooting. You keep going until the cavalry gets here,” he said.

In the same briefing, General Gustave Perna, chief operating officer of Operation Warp Speed, laid out a vaccine distribution plan, saying vaccines would be shipped within 24 hours of Emergency Use Authorization and people would be getting vaccinated within another 24 hours.

Perna said that the Pfizer vaccine would immediately be transported to UPS and Fedex facilities for distribution and dry ice kits would be delivered to sites of vaccine administration. He said his team had already prepared 100 million ancillary kits containing needles, alcohol swabs, etc., and were preparing to distribute them at the same time.