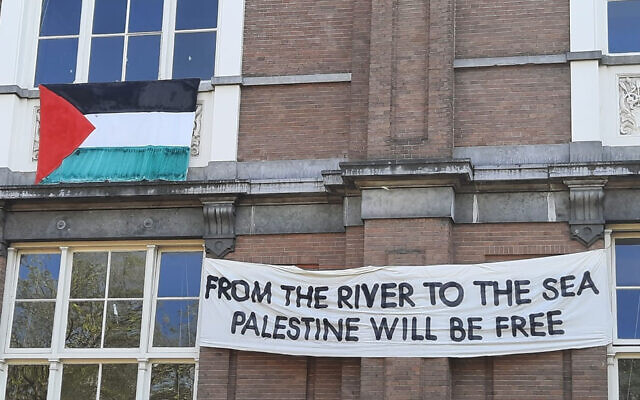 The State Academy of Fine Arts in Amsterdam had recently come under fire from Jewish groups for its open display of Pro-Palestine banners that read, “From the river to the sea, Palestine will be free.”

After supposedly being unaware of the banners that were put up by resident artists, the dutch university took them down, with Emily Pethick, the Academy’s director saying they were “not aware of some of the meanings of the phrase and have decided, with the resident artists who displayed banners on the subject, to remove them. We deeply regret it.”

In reaction to the incident, Ronny Naftaniel, chairman of the Central Jewish Board of the Netherlands, or CJO, on Facebook wrote, “This chant isn’t about supporting a Palestinian state but all about expelling the Jews from Israel. This will never happen. One Final Solution was enough,” he added, referencing the Nazi euphemism for the Holocaust.

As it stands, the commonly used phrase “from the river to the sea” has been used on numerous occasions by pro-Palestinians, and it refers to the area between the Jordan River and the Mediterranean Sea — a region comprising the West Bank and Gaza and Israel. Advocates of the slogan say it calls for freedom for all inhabitants. Critics say it references the widespread sentiment among Palestinians that all the land is occupied and should be liberated by dismantling the Jewish state.