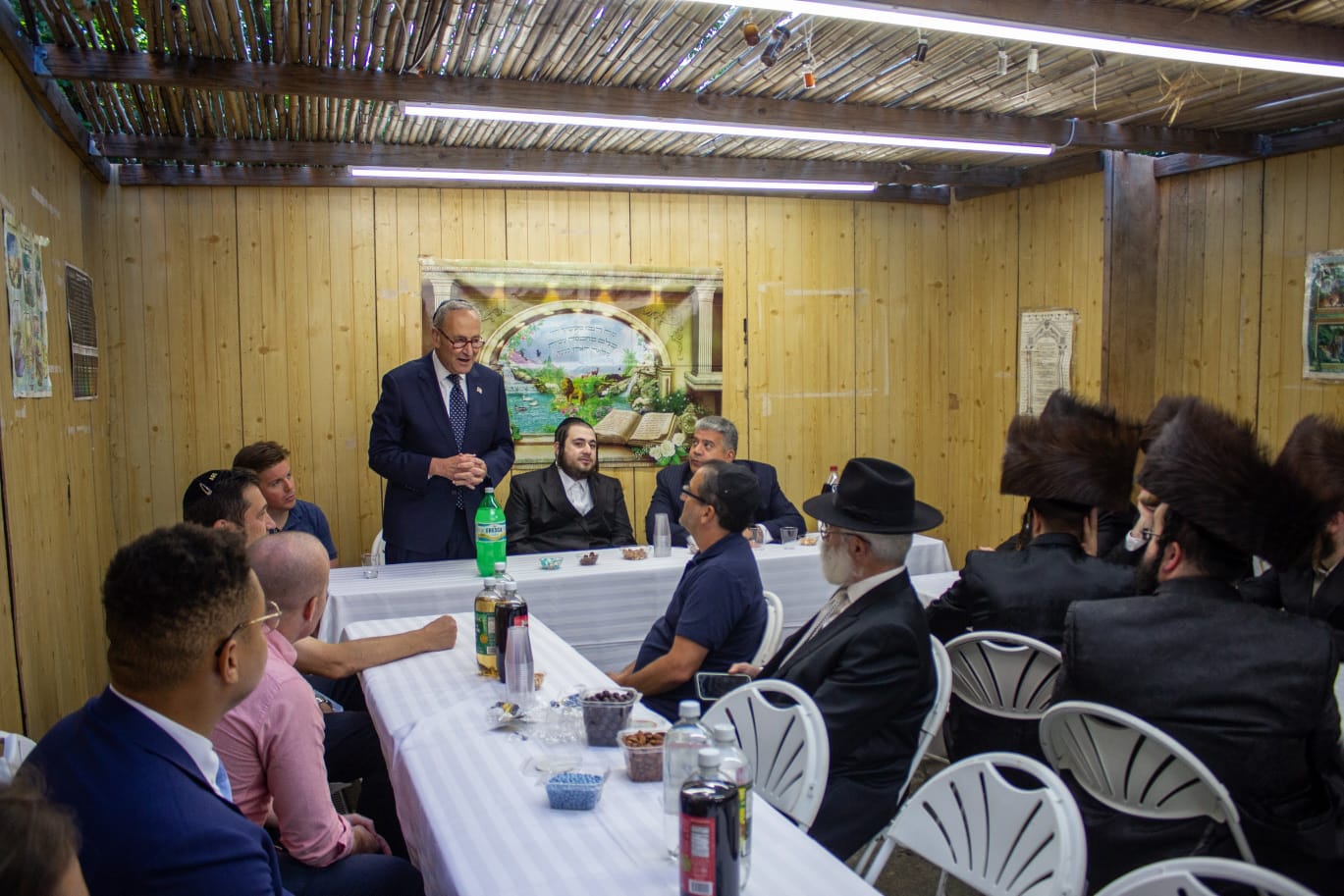 Elected Officials From Across the State Celebrate Sukkos in Borough Park With Community Leaders, Hosted by District Leader David Schwartz

Borough Park – A humble Borough Park Sukkah celebration, on Sunday, the 6th day of Sukkos, drew a rarely seen crowd of elected officials of all levels from across New York State. A crowd of askunim of the leading Khilas and Mosdos had the opportunity meet up-close, in a very humble setting, New York’s Senator and the Majority Leader of the United States Senate Chuck Schumer, and a large group that included Congressmembers, incoming Borough Presidents, City Council members and Brooklyn District Leaders etc.

Among the attendees at the event – hosted by Borough Park’s young but dynamic District Leader David Schwartz – were Congressman Ritchie Torres, who was one of a number of Bronx officials braving the heavy traffic that day to attend the event, together with his colleague Rep. Yvette Clarke and former Rep. Max Rose. And Bronx wasn’t the furthest. Suffolk County Executive Steve Bellone, who is arguably holding the third highest executive position in the state (Suffolk is the largest non-NYC county, and NYC doesn’t have county executives), made his way from Riverhead to join the sukkah event.

The democratic nominees – and all-but-certain winners come November – for the Manhattan and Bronx Borough President, Current councilmembers Mark Levine and Venessa Gibson, also crossed their County border to the join the crowd at the 53rd Street Sukkah. Brooklyn District Attorney Eric Gonzalez generously offered to approve the visas for outer-county officials, granting them entry to Brooklyn.

The highlight of the event came early, with Senator Schumer’s remarks and kibbitzing. He reveled what propelled him to his majority leader post: his first bill in the NYS Assembly, at the age of 23 – being one of the youngest elected officials in Brooklyn, until David Schwartz bested him when he was elected to the district leader post at the age of 22 – was to revoke Alternate Side Parking on Shmini Atzeres and Simchas Torah.

The Senator than listed his securing funding for yeshivas and shteeblech in the Covid bill, and seeing to it that all children should be eligible for the expanded child care tax credits. Originally, the 250-300 monthly payments were only supposed to go to up to three children in a family. “Our Rabunim called me up from the Bobov, from the Satmar asking what about our families,” he said. The senator then made sure that all children will get the credits, to cover the high cost of living for large families.

The senator spent the bulk of this address on the Alta Fixler case, that Rabbi Moshe Dovid Niederman, Presidents of the UJO of Williamsburg, got him heavily involved in trying to save this two-year-old child’s life. The senator already secured a visa for the child, but the British hospital refused to allow for the child to be airlifted to the US where facilities are eager to provide her quality care. Instead, they insist to discontinue Alta’s life support.

“Rabbi Niederman, he called me one day. Here is a new theory you should try,” the Senator said. Since the decision to discontinue Alta’s life support is a hospital decision, and the British have a national health care system, Prime Minister Johnson should be able to override this decision. During a meeting with Johnson last week, when he was in the US for the UN general assembly, “I brought this up him. He was familiar (with the case). I told him, Jewish values or saving a life highest Talmudic value. You Mr. Prime Minister can save a life,” Schumer said.

Senator Schumer was introduced by Rabbi Joel Rosenfeld, Director of Government Affairs for Bobov Community who is known for this political acumen. Rosenfeld thanked the Senator for not forgetting of his constituents and tending to the community’s needs, at the same time while minding the country’s most important business.

Congressman Torres – who came fresh from being one of the key orchestrators of congress’ resounding vote to approve funding for the Iron Dome after a handful of members forced to remove if from a larger spending bill – was lauded for being a steadfast fighter against antisemitism, and his support for the community even when it’s unpopular. Torres vowed to continue stand up for what’s right. He pointed out that the Iron Dome provided mean more defends, which reduces offense and reduces bloodsheds on all sides and of all people, and he couldn’t fathom the opposition to it.

Borough Park’s Councilman Kalman Yeger profusely thanked his former colleague Congressman Torres for standing up for the Jewish community, and being a shield against antisemitism.

Governor Kathy Hochul was represented by her senior advisor, Brooklyn’s Shirley Paul, and the her Jewish liaison, Jake Adler. Democratic Nominee to the Surrogate Court Judge Rosemarie Montalbano, who was strongly supported by the community that helped her secure the nomination, was also in attendance, as were Democratic District Leaders Kristina Naplatarski, Emile Bazile and Doug Schneider among others.