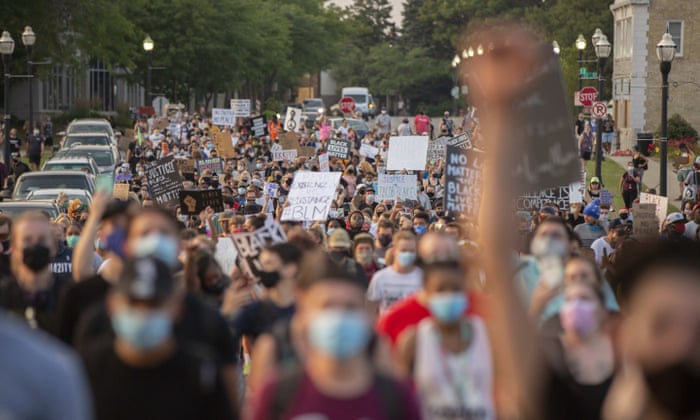 Despite being taken down for violating Facebook and Twitter policies a week ago, social media posts praising Wisconsin shooter Kyle Rittenhouse were being widely shared on Wednesday.

Charged with homicide, the 17-year-old Illinois teenager Kyle Rittenhouse had been held for the fatal shooting of two protestors at Kenosha, during the protests held against the brutal police killing of Jacob Blake. He has been charged as an adult with two counts of first-degree homicide for the deaths of Anthony Huber and Joseph Rosenbaum, and one count of attempted homicide. Rittenhouse’s lawyer has said he plans to argue self-defense.

A week ago, Facebook tagged the killings a mass shooting and pledged to remove content praising the shooter, but as of Wednesday posts calling Rittenhouse a “patriot” were still racking up thousands of shares and likes, according to data from social media monitor CrowdTangle. The post claiming Rittenhouse is a “patriot”  has been shared more than 600 times, per CrowdTangle, which is owned by Facebook.

One post, on a page called “Confederate,” said Rittenhouse was acting in self-defense against an armed “mob” and contrasted media coverage of the shooting with that of a Black man suspected of involvement in a shooting death during protests in Atlanta.

Twitter said it had stopped certain terms from trending and appearing in search suggestions, but declined to disclose a full list, citing the risk of users circumventing those actions.

Facebook said it was removing content supportive of Rittenhouse and said that posts calling him a “patriot” qualified for removal.