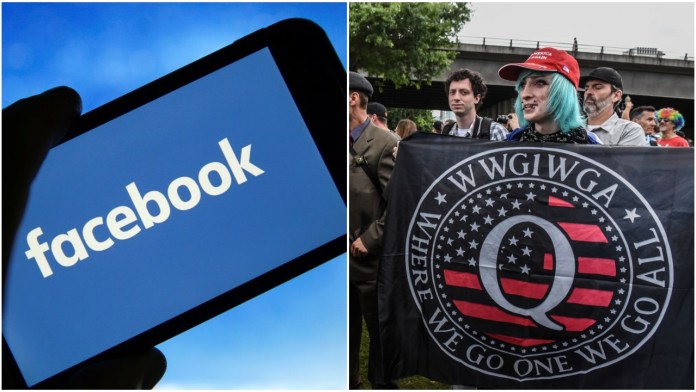 The controversial group of extremist conspiracy theroists QAnon has been downranked by Facebook, as a response to the flurry of misinformation that it was intending to spread online. Attempting to hijack the ‘Save The Children’ movement to push falsehoods about the exploitation of children by prominent Democrats without proof to substantiate the accusations, Facebook, on Wednesday announced a crackdown on QAnon.

In a blog statement on Wednesday, Facebook claimed, “We are taking steps to address evidence that QAnon adherents are increasingly using the issue of child safety and hashtags like #savethechildren to recruit and organize.” Facebook users searching for that hashtag and related hashtags will be directed to credible child safety resources, the company said in a blog post.

Being downranked by the social media portal, QAnon’s pages and the content will be made much less visible to users across the platform. The blog post written by Facebook also stated,  “In addition, content about QAnon and child safety are eligible for fact-checking through our third-party fact-checking program. Content that is debunked will be reduced in News Feed and filtered from Explore and hashtags on Instagram, will receive a label (so that people who see it, try to share it or already have, will see more context), and it will be rejected as an ad.”

Moving further the company also stated that it was continuously on the lookout for miscreants and groups who are looking to propagate this kind of instigative misinformation and that it will continue to ban ads that praise or support extremist conspiracy group QAnon and other militia groups.

QAnon is a far-right conspiracy theory alleging that a cabal of Satan-worshiping pedophiles running a global child sex-trafficking ring is plotting against President Donald Trump, who is battling them, leading to a “day of reckoning” involving the mass arrest of journalists and politicians. With the upcoming elections, the spread of misinformation seems to be getting worse, mostly targetted towards swaying people’s opinions.  Conspiracy theorists have formulated many such pieces stating Biden and other Democrats are pedophiles, and that Americans must fear the vulnerability of their children if they come into power.

A movement that isn’t just limited to the virtual world, offshoots of the #SaveTheChildren campaigns have been seen on the streets with rallies in cities across the country calling for an end to child exploitation.

According to CrowdTangle, a public insights tool owned by Facebook, millions have been exposed to these anti-child-trafficking memes. From June 1 to Sept. 24, there were nearly 5.3 million interactions with posts on public pages and in public groups on Facebook that mentioned #SaveTheChildren. Public posts on Instagram had about another 11.6 million interactions.