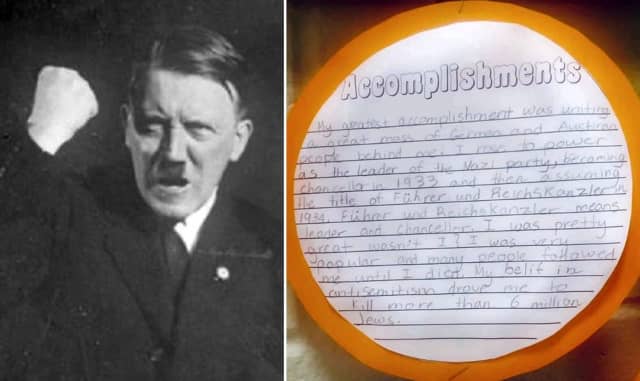 Drawing mass condemnation from not just Jewish groups, but also other members of the community, a fifth-grade student’s controversial report on Hitler was reported as being hung in the Maugham Elementary School hallway for weeks before it was taken down.

The horrific report, which was written in Hitler’s voice, and cited his “accomplishments” was posted on social media by local parent Lori Birk. The project read, “My greatest accomplishment was uniting a great mass of German and Austrian people behind me. I was pretty great, wasn’t I? I was very popular and many people followed me until I died.” Apparently, the student who wrote the Hitler bio also dressed as the Nazi leader as part of the assignment. Birk mentioned that the report was in the hallway for at least two weeks beginning in April.

Birk’s post drew strong reactions from social media users, one of whom said, “How is this possible in one of the most Israeli towns in the country. I am disgusted.” Another user commented, “This is one of the most f’d up things I have ever seen.”

Meanwhile, in a statement on Tuesday, Tenafly Public Schools Superintendent Shauna DeMarco said the project came from an “assignment on social norms and historical figures who personify good and evil. The assignment (which was given by a teacher who happens to be Jewish) asked students to speak from the perspective of one of these individuals and how they might have perceived and rationalized their actions.”