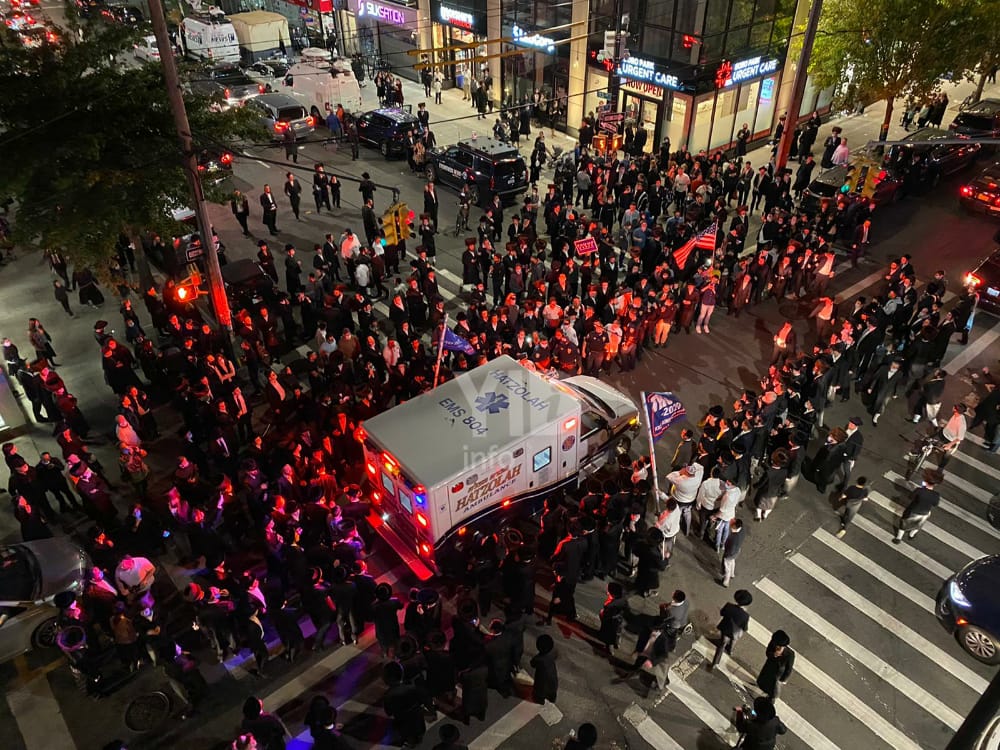 Staging protests against the unjust targeting of Jewish communities in the Big Apple, protesters took to the streets for the second consecutive night since Governor Cuomo announced restrictions.
Carrying flags in support of President Trump and citing the mismanagement and targetted attempts to single out the Orthodox Jewish community by Mayor Bill de Blasio and Governor Andrew Cuomo, hundreds of protesters marched at 9 Pm on 13th Ave. and 47th St. to calmly protest the intensified restrictions. Soon after the community gathered, their protests spontaneously transformed into freilach dancing, especially in celebration of this week, which is z’man simchasanu. It is believed that within seven days of Sukkos are the wellsprings from which we draw our joy for the rest of the year.

The new state-mandated guidelines state that red “intense clusters” will see all non-essential businesses and schools closed, restaurants reduced to takeout only, mass gatherings prohibited and houses of worship limited to a maximum of 25 percent capacity or 10 people. In orange zones schools will also go to remote learning, high-risk non-essential businesses including gyms will be closed, restaurants will be restricted to outdoor dining with a maximum of four people per table and mass gatherings will be capped at 10 attendees, and houses of worship at either 25 congregants or 33 percent capacity.

As reported by YidInfo, several Yidden in Boro Park held high tall blue Trump flags that waved in the night on 13th Ave. as leibidik music played, and men danced in a circle. Despite the uncertain times, the merriment featured keyboard and microphones as people sang, danced, celebrated, and brought down even more simcha.
Whilst claims of protests taking violent turns were reported in other instances, many community leaders stressed the fact that the community was following all the necessary guidelines, but the Governor and Mayor were just looking to forward some kind of personal vendetta against the Jewish communities residing in the city.

While businesses have already taken a hit, these further closures are being argued as an attempt to cause harm to the Orthodox communities, whilst also trying to curb the way they practice their religious worship with restrictions that have been imposed on neighborhood synagogues.