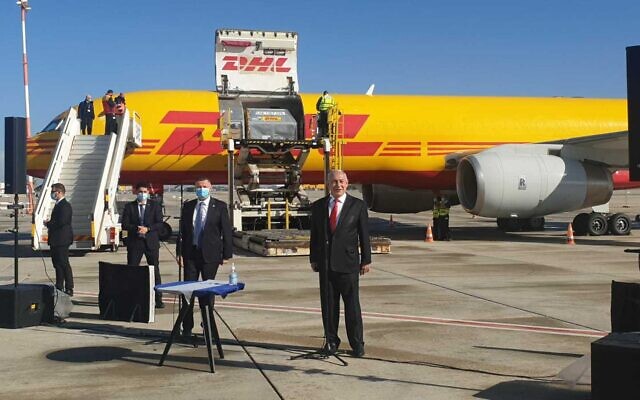 First Doses of Pfizer Vaccine Arrive in Israel, Netanyahu To Get First Shot

Israel’s first batch of vaccines flew in from Brussels earlier today, with thousands more to be welcomed in the country tomorrow. The Pfizer vaccine candidate which is yet to receive approval from the FDA, here in the USA, will be administered in Israel, similar to the UK- in a mass inoculation program.

Speaking at the Ben Gurion Airport, Prime Minister Benjamin Netanyahu, who welcomed the vaccines, said that he would be the first person in Israel to receive the coronavirus vaccine as part of a campaign to encourage inoculation. “What’s important to me is that people of Israel get vaccinated. I believe in this vaccine. I want the people of Israel to get vaccinated and so I will be first,” Netanyahu said.

“I have been the prime minister of Israel for quite a few years, and this is one of the most exciting moments,” he said. “I worked hard for long months with the Health Ministry and other organizations to find a solution to the pandemic and now you see the forklift unloading the first vaccines of millions that will come for the people of Israel.”

The initial delivery from Brussels invited a set of around 3-4000 vaccines in the first batch, with a bevy of more shots arriving tomorrow. As reported by local Israeli media, the first shipment will be a pilot program, to practice the transit and storage of the vaccines, which must be stored at a freezing cold -70°C (-94°F) and used within five days of their removal from cold storage.

Meanwhile, Israel’s Health Ministry has reportedly told health maintenance organizations that December 20 is the target date to begin vaccinating Israelis against COVID-19, which is speculated to be the same timeframe as the US, once the FDA approval comes through. A national vaccine storage and distribution center has been set up in the southern Negev desert region, where the millions of doses of vaccines that Israel has ordered are to be warehoused and then sent around the country.

As of Wednesday morning, a day after the government scrapped its plan to impose a nightly curfew for three weeks due to legal difficulties, Deputy Health Minister Yoav Kisch said that in his estimation, Israel would still need to tighten restrictions next week as infections climb, despite the inoculation program that will cater to only a few members of the nation’s population.