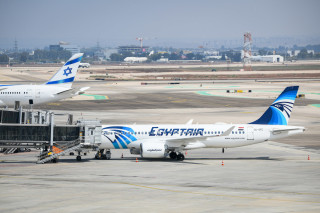 Marking a new chapter in the long-strained relationship between Israel and Egypt, the first commercial Egyptair flight touched down at Ben-Gurion Airport near Tel Aviv this past Sunday.

Starting this week, the airline will operate four nonstop roundtrip commercial flights a week between Cairo and Tel Aviv.

Former Ambassador Zvi Mazel, who served eight years at Israel’s embassy in Cairo from 1980 to 1982 and then from 1996 to 2001, spoke to the JNS, saying, “If this flight signals the warming of relations and is the opening of a new phase in normalization between the countries, then yes, absolutely, I am happy.”

“Maybe now something is changing,” said Mazel. “After all, the Abraham Accords are very important, and I’m sure many Egyptians are asking themselves why they waited this long to normalize relations.”

Furthermore, according to Mark Feldman, director of Diesenhaus Jerusalem, a leading tourism brand in Israel, the new route from Israel to Egypt will also attract numerous Christians, as soon as the pandemic curbs are lessened. “I’m sure we will see an influx of Christians combining a visit to the Holy Land with Egypt, but until we open up our country, nobody is making plans,” Feldman said.