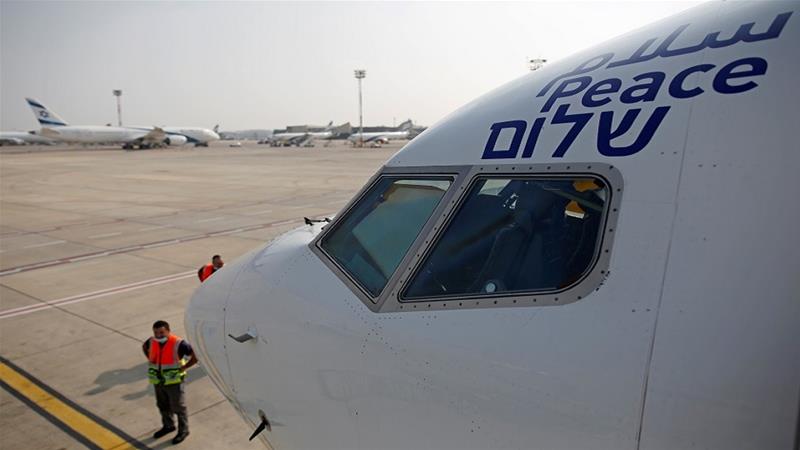 First Ever Commercial Flight Takes Off From Israel to UAE

Earlier today, the El Al commercial aircraft carrying US and Israeli delegates, took off to UAE, in order to cement a possible ‘normalization’ deal that aims at establishing open relations.

A few of President Trump’s top aides, headed by son-in-law Jared Kushner and Robert O’ Brienop, along with their Israeli counterparts, have been sent to the UAE earlier today, to initiate peace talks and prospective friendly relations. Israel’s flag carrier El Al’s historic flight from Tel Aviv to the UAE capital Abu Dhabi flew over Saudi Arabia, after the first-ever instance in which Riyadh agreed to the Israeli request.

The plane carrying the US and Israeli delegations to Abu Dhabi has the word “peace” inscribed on it in English, Hebrew, and Arabic. It is also named after Kiryat Gat, a Jewish settlement built on the remains of two ethnically cleansed Palestinian villages, Iraq al-Manshiyya and al-Faluja.

Announced on August 13, the “normalization” deal between UAE and Israel is the first of its kind after 20 years of heated conflict that was catalyzed largely by shared fears of Iran. The move was unwelcomed by Palestinians since it caused widespread concerns
over the possible weakening of arrangements with Arab states that called for Israeli withdrawal from occupied territory and acceptance of Palestinian statehood.

Before boarding the aircraft, Kushner claimed “While this is a historic flight, we hope that it will start an even more historic journey in the Middle East and beyond.” “To have played a role in its creation, and I say this as the grandson of two Holocaust survivors, it means more to me and to my family that I can ever express,” he further added.

During the two-day visit, officials will explore bilateral cooperation in areas such as commerce and tourism, whilst producing a date for a Washington signing ceremony, perhaps as early as September, between Netanyahu and Abu Dhabi’s Crown Prince Sheikh Mohammed bin Zayed Al Nahyan.

On Sunday, O’Brien said that more Arab and Muslim countries were likely to follow Abu Dhabi’s move. “We believe that other Arab and Muslim countries will soon follow the United Arab Emirates’ lead and normalize relations with Israel,” O’Brien told reporters after talks at Netanyahu’s residence.
While he refrained from naming the countries who’d follow suit, Israeli officials have publicly mentioned Oman, Bahrain, and Sudan. Recent news reports also suggest Morocco may be considering a similar agreement with Israel in exchange for military and economic aid.