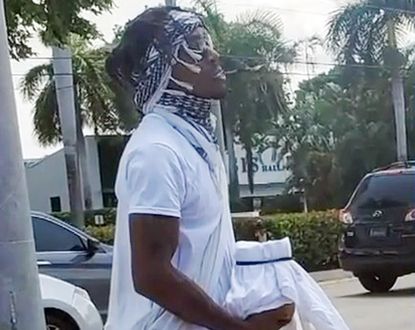 Amidst a sudden spur in antisemitic incidents across the US, following the recent Israel-Palestine conflict, a highly despicable incident took place in Southern Florida on Friday.

According to news reports, an African-American man approached the Chabad of South Broward and shouted indecent slurs at the Rabbi, whilst leaving a bag of human feces in front of the building.

The Miami television station WSVN reported that the unidentified man was captured on camera as he went towards the synagogue on his electric bike. The man then left and returned a short time later, carrying a bag or pillowcase that contained human feces, said Hallandale Beach Police Capt. RaShana Dabney-Donovan.

He dumped the bag in front of the synagogue and yelled, “Jews should die,” according to a police report. He also spat at a menorah near a sidewalk, according to the police.

In reaction to the event, which was almost obviously related to the recent conflict, Hallandale Beach Commissioner Anabelle Lima-Taub said, “It seems that every time there is an uprising or a situation globally or nationally, easily identifiable members of our religious community, specifically the Orthodox Jewish community, are a target.”