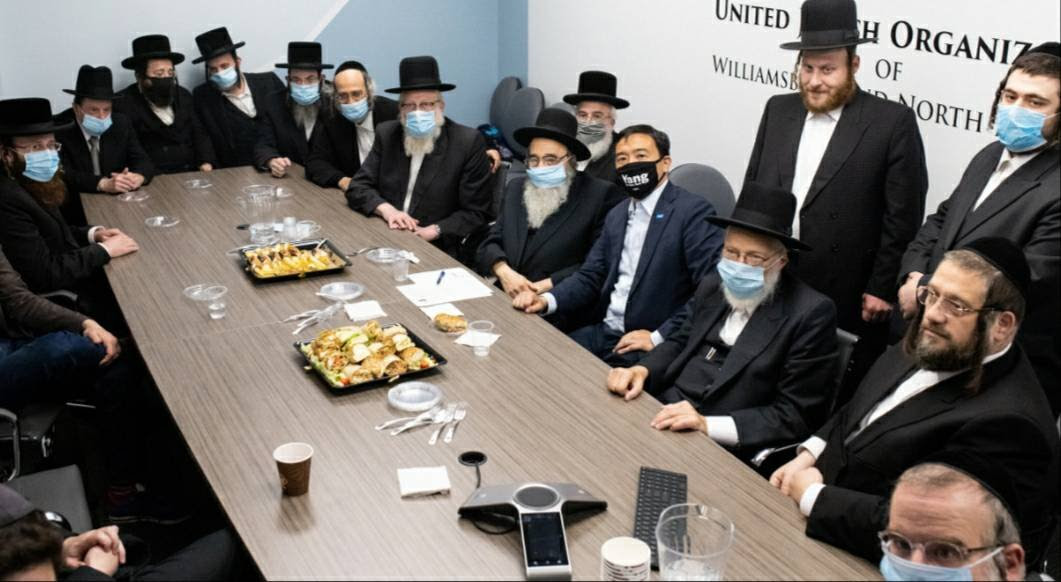 HISTORIC – Yesterday, a group representing the major Hasidic communities of Williamsburg issued their joint endorsement of Andrew Yang for mayor of NYC. Among the leaders are representatives of both factions of Satmar, which is the largest Hasidic group with a united bloc vote of more than ten thousand.

The coalition consists of Jewish leaders and local groups representing the Jewish community, including Satmars Pupa, Viznitz, Neitra, Vien, Tzehlim, Klausenburg, Skver, Krasna, and Krula leaders, and they join the major Borough Park Hasidic groups who have all announced their endorsement of Andrew Yang for mayor of NYC.

Rabbi David Niederman stated, “As a minority group that is ridiculed, denigrated, and the victims of frequent hate crimes, we know to appreciate a candidate like Andrew Yang who isn’t afraid to take unpopular, but right, positions. On Yeshivas – the issue that is most important to us and which defines our religious identity, Andrew chose and is sticking to the right side of protecting our religious freedoms, over the flavor of the minute perpetuated by those hostile to our religious way of life. Thus, we were very enthusiastic to endorse Andrew Yang as our number 1 candidate.”

Rabbi Moish Indig stated, “Andrew Yang is a fresh leader with the new approach we need to recover. He has made a point of making the Jewish community feel valued and heard.”

Andrew Yang has stated, “I am so deeply proud to have earned the united endorsement of such an incredible and diverse group of Jewish community leaders. New York’s Jewish community is not only core to who we are as a city, it is also going to be critical to our comeback. But for too long, like so many other communities in our city, the Jewish community has been neglected and overlooked by our government. And that is why I’m running – to unify our city, and uplift the communities that have been denied a seat at the table for decades.”

Andrew Yang at a recent meeting with Williamsburg community leaders.