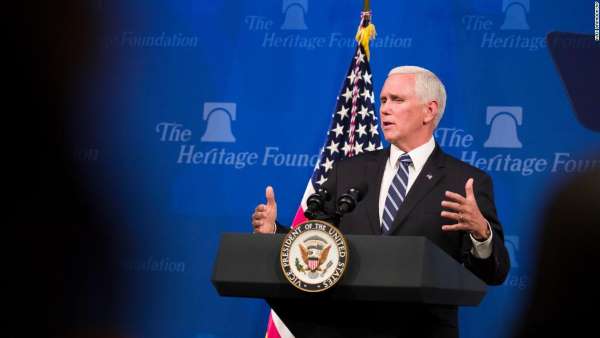 Revealing his post-vice presidency plans, conservative Heritage Foundation revealed that Mike Pence was to join the think-tank as a distinguished visiting fellow.

According to the announcement, Pence, 61, will advise the influential organization’s experts on public policy issues and “and ensure Heritage remains the leading conservative voice on solutions to America’s biggest challenges.” He will also deliver a series of speeches and write a monthly column for the think tank’s news outlet, The Daily Signal.

“Over the course of the past four years, our team at Heritage has worked closely with members of the Trump administration on a host of policy accomplishments,” said Heritage President Kay C. James. “That’s why I am excited Vice President Mike Pence will join forces with Heritage to ensure we continue to advance conservative principles and policy solutions. His allegiance to the Constitution and commitment to advancing a conservative policy agenda make him an outstanding fit for The Heritage Foundation.”

“The Heritage Foundation is a flagship of the conservative movement and I am profoundly honored to join them as a distinguished visiting fellow to advance conservative policies that will benefit every American,” Pence said. “The Heritage Foundation helped shape my conservative philosophy for decades and played a pivotal role advancing conservative policies throughout the Trump Administration. I look forward to rolling up my sleeves and working with the all-star team at Heritage as we continue to take the case for a strong national defense, free markets and traditional values to policymakers across the Nation and to every American who cherishes our Heritage of Freedom.”

The announcement came a day after the Former VP announced the setting up of a post-White House transition office in northern Virginia, near Washington, D.C. The Office of the Former Vice President will handle correspondence, scheduling requests, public statements and official activities for him and his wife, Karen.