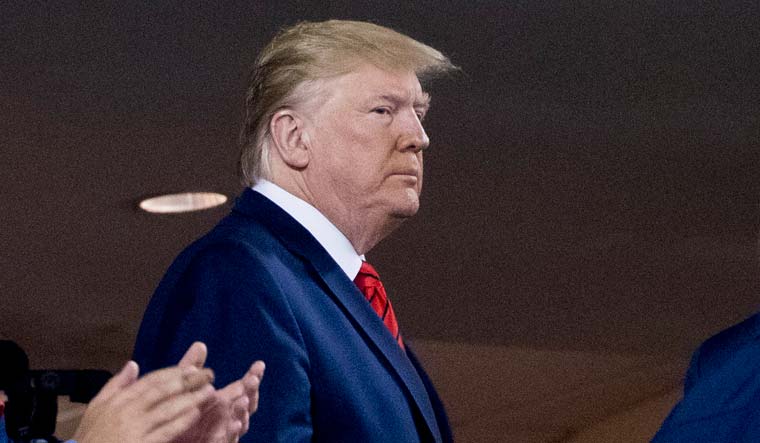 Slamming President Joe Biden for his disgraceful handling of the Afghanistan crisis that led to a brutal carnage in Kabul on Thursday, former President Donald J Trump said in a videotaped statement that “it would not have happened if I was your president.”

In a statement to Fox News’s “Hannity” program, Mr. Trump began with the memorialization of the 13 US service members who died in the “savage and barbaric” attacks, which also killed at least 60 Afghans and were claimed by the ISIS-K terror group. “These noble American warriors laid down their lives in the line of duty,” he said. “They sacrificed themselves for the country that they love, racing against time to rescue their fellow citizens from harm’s way. They died as American heroes and our nation will honor their memory forever.”

He then offered condolences to the families of the fallen service members, saying: “Today, all Americans grieve alongside you.” He then addressed veterans of America’s 20-year war in Afghanistan, telling them: “We know what you did, we know how brave you were, and we thank you, we salute you, and we honor you for all time.”

Following this, Trump harshly criticized the Biden administration for working with the Taliban in an effort to secure the withdrawal of thousands of American citizens and Afghans who aided the US-led NATO forces that drove the Taliban from power in 2001.

“The Taliban is the enemy,” the former president said. “I dealt with the leader of the Taliban … this is a tough, hardened person that’s been fighting us for many years, and we’re using them now to protect us? Look what happened with their protection, 100 people – much more, they say, than 100 people – were killed and 13 of our incredible military were killed, and that’s just the beginning.”

“We had plenty of time. They [The Taliban] weren’t gonna move. We had them under total control,” he said. “We had the airplanes, we had the Air Force, they had nothing … There was no reason to expedite. I could have taken two years, three years to get [US forces] out. We were gonna get ‘em out fast, but … we were in no rush. We controlled everything, and they were afraid to move.”

“They wouldn’t have done a thing without my approval,’ Trump went on. “Everything they did was conditions-based, and the biggest condition [was] you can’t kill Americans. And they can go back to their civil war after we’re gone, they can do whatever they want to do, but you can’t ever kill Americans and you can never come to our homeland, and he [Taliban leader Mullah Abdul Baradar] knew what was going to happen if they ever did it.”

He ended his address by saying, “Biden came in and they saw weakness. He didn’t do anything, and then they took over and we ran out and we’ve just destroyed the image of our great country, of our incredible warriors – and they are incredible warriors, but they need leadership at the top and they don’t have it … He talks like a tough guy, and he’s not a tough guy. He’s just the opposite and the world knows it.”