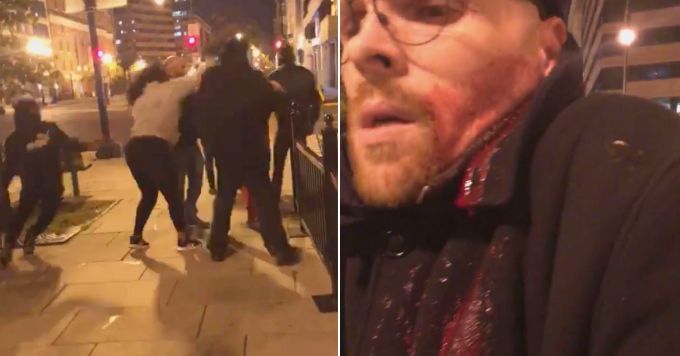 It has been reported that four members of the far-right group ‘Proud Boys’ were stabbed by Black Lives Matter protesters in Washington DC on Wednesday, as election day protests were underway.

The leader of the far-right Proud Boys, Enrique Tarrio told the media that he was one of four people who had been stabbed after being “jumped by Black Lives Matter” in Washington, DC. A police investigation of the matter is being conducted, and it has also been reported that another right-wing activist injured in the midst was identified as Bevelyn Beatty.

The DC Police Department confirmed that the stabbing took place on the 700 block of 14th Street Northwest. It has been confirmed by the press that all four victims (three men and one woman) were members of the Proud Boys. Cops are still in search of the BLM perpetrators who carried out the violence.

The Proud Boys are known for their “anti-Muslim and misogynistic rhetoric” and have been classified as an ‘extremist group’ by the FBI and have a strong opposition against left-wing and progressive groups.

Beverlyn Beatty and another man were viciously attacked tonight. Beveryln was stabbed in the back and the other man appeared to be stabbed in the neck. This is still image from the video showing the attack. The person wearing what may be a puma sweatshirt appears to stab both pic.twitter.com/azMzuGfiTJ

Before the stabbing, which occurred around 2:30 AM, more than 1,000 people protesting against President Donald Trump converged on Black Lives Matter Plaza, just a block from the White House, while hundreds more marched through parts of downtown Washington, sometimes blocking traffic and setting off fireworks.

A video-recording of the incident showed the group who was jumped and knifed, as one man was seen walking back to the videographer and saying, “I’m bleeding.” After the attackers fled, Bevelyn Beatty, a black woman who previously dumped paint over the Black Lives Matter mural outside Trump Tower, was seen holding her lower back, saying, “They stabbed me.”

After exchanging a few more dialogues, the group flagged down police and medics, telling them, “We just got jumped by Black Lives Matter here.” “We were helping some guy that was getting stabbed by two Black males and one female. Bevelyn got stabbed as well as two Proud Boys and the guy they were attacking. I got slashed, but it’s not serious. We were walking to our cars,” Tarrio told the media.

Based on the statements, the DC police said they are looking for three suspects: two Black males wearing all-black clothing and a Black female wearing black sweatpants with white stripes, orange leggings, and a dark gray coat armed with a knife.