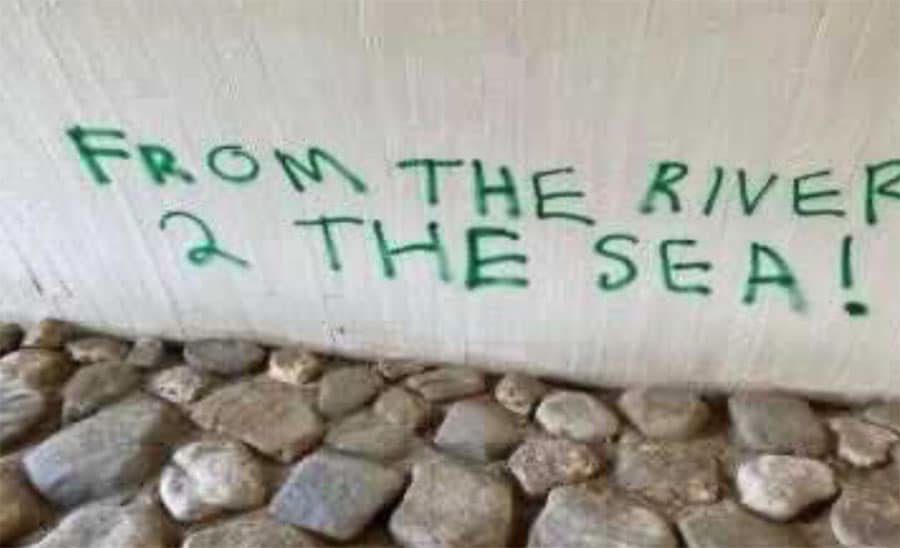 “Free Palestine” Graffiti Discovered at the University of Massachusetts at Amherst

Amidst growing anti-Israel sentiments across Universities and student organizations, the slogan “from the river to the sea, Palestine will be free” was found spray-painted in large letters alongside “Free Palestine” at the University of Massachusetts at Amherst this week.

First tweeted about by watchdog group StopAntisemitism.org, the video posted online showed a number of sprayed slogans at the South Tunnel of the University, which is one of the walkway arteries on campus for students to get around. The slogans were also seen to be accompanied by a Palestinian Flag.

Location South Tunnel, one of the walkway arteries on campus for students to get around. pic.twitter.com/wZAc3J82aO

Furthermore, StopAntisemitism.org said “dozens” of Jewish students at the university contacted them “out of safety concerns” after seeing the graffiti. UMass Amherst had covered most of it by Monday evening, though left the names of the police brutality victims, as well as a heart drawn on the floor in the colors of the Palestinian flag.

As reported by the Jewish News Syndicate, one wall also displayed the names of victims of police brutality, such as George Floyd and Breonna Taylor, but also included 27-year-old Palestinian motorist Ahmad Erekat, who was killed by the Israel Defense Forces in June 2020 after he rammed his car into a security checkpoint.

This incident is not the first of its kind on the campus. The UMass campus has been defaced with similar graffiti before. Most notable was an incident on Holocaust Remembrance Day in April 2020, when “Palestine” was spray-painted in Arabic on the Hillel building. Several organizations had spoken out at the time, condemning the incident, including Aviva Rosenschein, international campus director for CAMERA on Campus.

“We are appalled to see such vandalism on UMass Amherst’s campus, especially on Yom Hashoah, when Jews around the world remember the 6,000,000 Jewish victims of Nazi Germany’s genocide. The vandal’s choice to target a Jewish communal space with political messaging highlights a common pattern displayed by many anti-Semites: holding American Jews accountable for a conflict happening on the other side of the world. Attempts to intimidate Jews for such a reason are entirely unacceptable. Our thoughts are with the UMass Jewish community during this time, and we are here to assist UMass Hillel in any way we can,” the statement read.