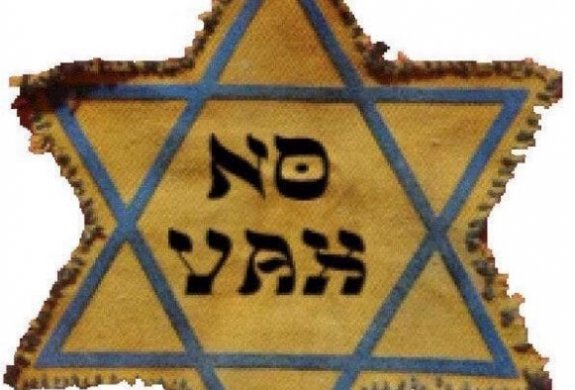 In another instance of anti-vaxxers using a Nazi Star to convey their sentiments, demonstrators in the French City of Avignon were seen wearing yellow stars marked with the words “Not Vaccinated”. The move continued to draw outrage this week from local politicians, who accused organizers of mocking the Nazi persecution of the Jews by appropriating one of the most visible symbols of the Holocaust.

“Convergence Citoyenne du Sud” a radical group that featured around 45 protestors that marched through the center of the historic city in the south of France, was slammed for openly comparing government-imposed restrictions to counter the COVID-19 pandemic with Nazi laws discriminating against Jews. The protestors also compared a proposed EU passport reserved for those who have been vaccinated against the disease to Nazi antisemitism.

Completely mindless in their approach, and hitting the wrong nerve with the Jewish community one of the organizers later admitted that the use of the yellow star — which the Nazis compelled all Jews over the age of six to wear on their outer clothing — was “maybe a bit strong.” But the demonstrator went on to say that “it is also the expression of how people feel about a sort of institutionalization of discrimination. We are certainly not in genocide, but these laws against liberty recall dark moments in our history.”

Reacting to the incident,  parliamentary representative for the region, Alpes-Maritimes deputy Eric Ciotticondemned the protestors as “brainless.”

“Outrageous!” he tweeted. “In Avignon, brainless demonstrators used a yellow star crossed out with the words ‘unvaccinated’ in parallel with the yellow star imposed on Jews during World War II.”

Fabienne Haloui — a local French Communist Party (PCF) councilor — said that while protests were legitimate, the participants had discredited their own message by invoking the Nazi persecution of the Jews. “The restriction of freedoms that the vaccination passport can cause can in no way be compared to the persecution of Jews which ended in genocide,” she said. “Sometimes it is good to have a sense of proportion so as not to become indecent.”

Earlier this week, a similar tool was adopted by a Canadian anti-vaxxer, who used the Star of David to make a T-shirt reading ‘COVID Caust’, implying that the vaccine mandate was as bad as the Holocaust.