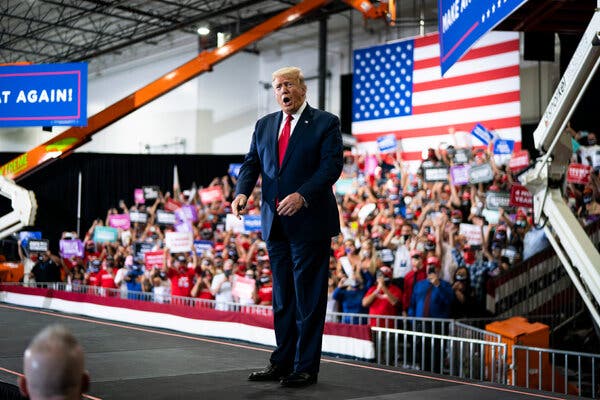 Despite facing flak for not adhering to social distancing norms, President Trump on Sunday night held a packed indoor rally at a warehouse outside Las Vegas where he urged the governor to “open up your state” and accused Barack Obama of spying on his 2016 campaign during a rally on Sunday night — prompting chants of “lock him up” from the crowd.

Speaking to thousands of supporters at the plant in Henderson, Trump targeted Gov. Steve Sisolak, saying, “You have a governor right now who is a political hack.” Sisolak had earlier blasted the president for hosting the rally in violation of a state mandate, limiting gatherings to 50 people due to the coronavirus pandemic. Currently, casinos and restaurants, in some counties across the state, are operating at 50 percent capacity. But bars and taverns in the county remain closed.

Supporters attended the rally amass and lent their unconditional support to the President throughout his talk at the event. Whilst speaking about the involvement of Former President Obama, in the 2016 elections  President Trump the man of spying on his 2016 campaign during a rally. “He got caught. We caught him cold .. now let’s see what happens,” Trump said after repeating the accusation. This caused a massive uproar amidst the audiences, leading them to chant  “lock him up” at the top of their voice.

Under the Trump administration, the Justice Department is reviewing the origins of a probe that found Russian interference in the 2016 presidential election, mainly through digital media and online channels. The president has hinted that officials in the Obama administration were behind the investigation.

Earlier on Sunday, the President announced his intention to move forward with an executive order that intends to lower the price of prescription drugs in the US. Signed in July, the order seeks to have the government purchase drugs at the same prices given to countries designated as “favored nations”. The order states, “The days of global freeriding at America’s expense are over and prices are coming down FAST! Also just ended all rebates to middlemen, further reducing prices.”

Promising to lower the prices of medicines, especially for seniors, the Trump administration is expecting the implementation to go on floors before the November elections.