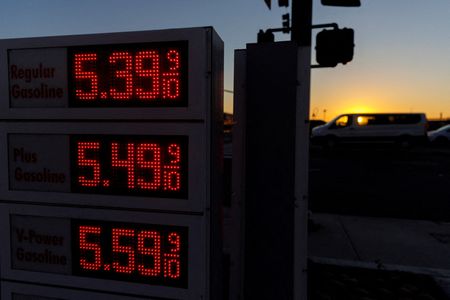 Gasoline At A New High: Prices Soar Over $4 Per Gallon

Soaring to the highest rate in the last 14 years, Gasoline prices in the US have climbed to over $4/gallon on Sunday.

In Biden’s America, the price for a gallon of gas is up nearly 50 cents since Russia invaded Ukraine, and at an average of $4.009 per gallon, the price is nearing a record-high of $4.114 per gallon set in July 2008.

As it stands, despite pressure from both Republicans and Democrats, the Biden administration is refusing to ban oil imports from Russia, which accounts for 10% of the total imported oil. Many have argued that despite the inevitable further rise in gasoline prices, the Biden administration should stop buying Russian oil, saying that it amounts to the U.S. funding Putin’s war on Ukraine.

Responding to this failure to comply, Secretary of State Antony Blinken said the U.S. will indeed consider blocking Russian oil imports, but will only do so in coordination with European allies. “The actions we’ve taken to date have already had a devastating impact on the Russian economy,” Blinken said on NBC. “We’ve seen the ruble in free fall. We see the economy heading into a deep recession. We’ve already had a major impact, but we are looking, again, as we speak, in coordination with allies and partners at this prospect of banning oil imports.”

In reaction to the situation, House Minority Whip Steve Scalise told Fox News, “President Biden should immediately reverse his devastating policies that are causing gas prices to skyrocket and are giving Putin leverage against the rest of the world and return to the policies that were working under President Trump to create American energy dominance with gas prices below $2 a gallon. Speaker Pelosi and President Biden’s radical Green New Deal agenda will be a major issue in November’s elections.”