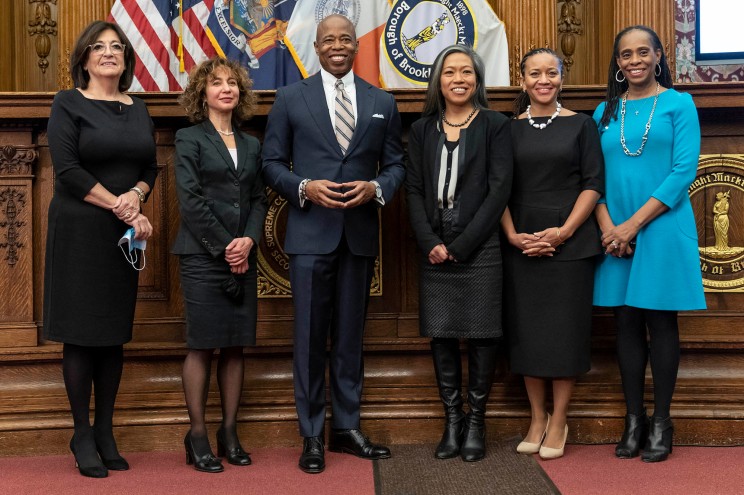 Looks like mayor-elect Eric Adams is one of the top advocates of gender equality.

On Monday, Adams picked five women who are political and civic heavy hitters as deputy mayors when he takes over on Jan. 1, including outgoing Mayor Bill de Blasio’s COVID-19 “recovery czar.”

“For us to ensure that this city recovers quickly while addressing the inequalities that plagued us well before COVID-19 struck, we must have top leadership that can both deliver for New Yorkers and is representative of New Yorkers,” Adams said.

“My administration will understand the people of the city it serves — and each of the people I am appointing today has the experience and skills to help us turn this city around the right way,” Adams added.

Adams said one of the reasons why he picked five women as deputy mayors were to show that the most qualified people should not sit on the bench when the game is on the line just because of their gender, their ethnicity, or any piece of their identity.

According to reports, Adams has picked Lorraine Grillo, appointed in February by de Blasio as head of the Big Apple’s pandemic bounceback initiatives, as his first deputy mayor.

Before her latest positions, Grillo began serving as head of the School Construction Authority in 2010 and has worked at the agency since 1994.

Aside from Grillo, Adams also selected Maria Torres-Springer — who headed three city agencies, most recently the city’s Department of Housing Preservation & Development — to be deputy mayor for economic development.

Torres-Spring is currently vice president for U.S. Programs at the Ford Foundation, and under de Blasio also led the city’s small business agency as well as the Economic Development Corporation.

“Hats off to Mayor-elect Eric Adams for recognizing the amazingly talented women in New York City and appointing so many of them as deputy mayors,” Holtzman said.

“This gives all women — and everyone who has been a victim of discrimination — hope that they can make it too,” Holtzman added.