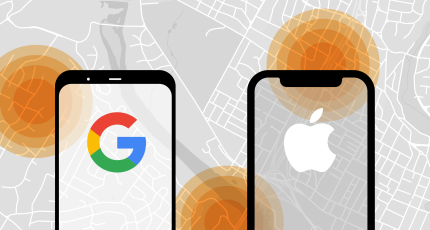 Two of the biggest rival tech-giants have teamed up to send push notifications to their users if they’ve been exposed to the novel coronavirus. Apple and Google have both taken up the task of notifying cellular device users to let them know if they might have been exposed to COVID-19.

On Tuesday, the companies announced the effort titled ‘Exposure Notifications Express’, as an opt-in based system that lets your local public health agency alert you to potential coronavirus exposure via a notice on your smartphone. This software will also the agencies to guide residents on actions to take if they’ve been exposed.

The two companies have worked together to create this software after they joined forces in creating a Bluetooth technology that helped health agencies develop mobile apps that can identify people who’ve been near with someone infected with the coronavirus. This app was designed to let users know if the other persons they were in contact with have been diagnosed with COVID while recommending self-quarantine in response.

In an earlier statement, Google had mentioned, “Contact Tracing “makes it possible to combat the spread of the COVID-19 virus by alerting participants of possible exposure to someone who they have recently been in contact with, and who has subsequently been positively diagnosed as having the virus.”

Identifying certain questions relating to user privacy that arose upon the announcement, the companies said the alerts to smartphone users are built on their privacy-optimized ‘Exposure Notification’ framework, which they claim doesn’t share location data from a specific smartphone with the government. Instead, it relies on random Bluetooth identifiers that don’t record anything regarding your identity. The companies have further clarified that they do not and will not use contract tracing to store users’ location data.

While Apple device users will start getting alerts immediately, Google will begin rolling out Android changes within a month. “You have to actively agree to start receiving the alerts and can opt-out at any time”, the companies said.

Early studies suggested that 60% of people needed to enable contract tracing in order for mobile apps to be effective in helping to contain an outbreak. Apple and Google said that exposure notifications can be effective at much lower levels of adoption.