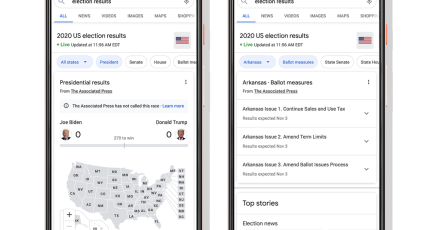 As every Big-Tech announces measures to ensure the credible flow of information during, before, and after the results, Google has announced that it will partner with the Associated Press in disseminating election results. In order to offer genuine and real-time updates, Google will ensure searching for election results will bring up a dedicated feature with up-to-date information.

Along with teaming up with AP, Google has also put in place a myriad of other voting-related regulations including a ban on political ads after the results. Google announced last month that it would ban US election-related ads after the polls close on November 3rd, in an attempt to curb the propagation of fake news from candidates who prematurely claim victory.

Among several other updates linked to the election, google published how it is tackling evolving online phishing attempts against the personal email accounts of staffers on the Biden and Trump campaigns by Chinese and Iranian APTs (Advanced Persistent Threats) respectively.

Furthermore, the company added authoritative information panels about a candidate ahead of video search results on YouTube. “As we approach November 3, we’re working hard to make YouTube a more reliable source for news and information, as well as an open platform for healthy political discourse,” said Leslie Miller, YouTube’s VP of government affairs and public policy during the announcement on September 24th.

Apart from these changes, the tech giant introduced a Google News hub for the 2020 elections, and updated settings wherein users can find polling places with Search or Maps.

Google had also sent an email to all advertisers stating they would not be able to run ads “referencing candidates, the election, or its outcome, given that an unprecedented amount of votes will be counted after election day this year.” The primary reason as to why these restrictions have been put into place is that many votes may be received by mail days after the polls close, giving unverified stories plenty of time to spread across sites like YouTube and Google Search.

Users will now encounter a new election module with data provided by the AP when they either search for “election results” on Google Search or ask, “Hey Google, what are the current election results?” The data will include both federal and state-level races across more than 70 languages, Google says.