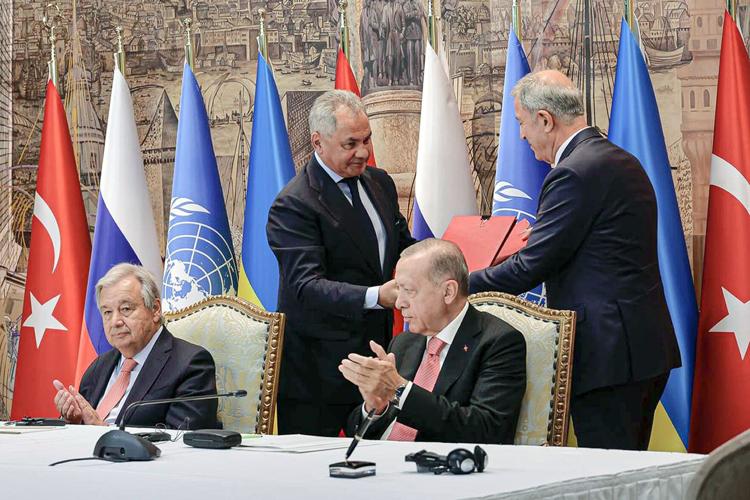 In a deal that set off a new ray of hope amidst the heated conflict between Ukraine and Russia, the two countries signed separate agreements Friday with Turkey and the United Nations clearing the way for the export of millions of tons of desperately needed Ukrainian grain, as well as some Russian grain and fertilizer, across the Black Sea.

This deal has now put an end to the threat of food security around the globe, which erupted due to the war-like conflict. The deal will enable Ukraine to export 22 million tons of grain and other agricultural goods that have been stuck in Black Sea ports due to Russia’s invasion.

As it stands, Ukraine is one of the world’s largest exporters of wheat, corn and sunflower oil, but Russia’s invasion of the country and naval blockade of its ports have halted shipments. Some Ukrainian grain is being transported through Europe by rail, road and river, but the prices of vital commodities like wheat and barley have soared during the war.

U.N. Secretary-General Antonio Guterres called it “a beacon of hope” for millions of hungry people who have faced huge increases in the price of food. “Today, there is a beacon on the Black Sea,” Guterres said. “A beacon of hope, a beacon of possibility, a beacon of relief in a world that needs it more than ever.”

Reacting to this news was EU foreign policy chief Josep Borrell, who said, “This is a critical step forward in efforts to overcome the global food insecurity caused by Russia’s aggression against Ukraine.”

Meanwhile, British Foreign Secretary Liz Truss applauded Turkey and the U.N. for brokering the agreement. “We will be watching to ensure Russia’s actions match its words,” Truss said. “To enable a lasting return to global security and economic stability, (Russian President Vladimir) Putin must end the war and withdraw from Ukraine.”