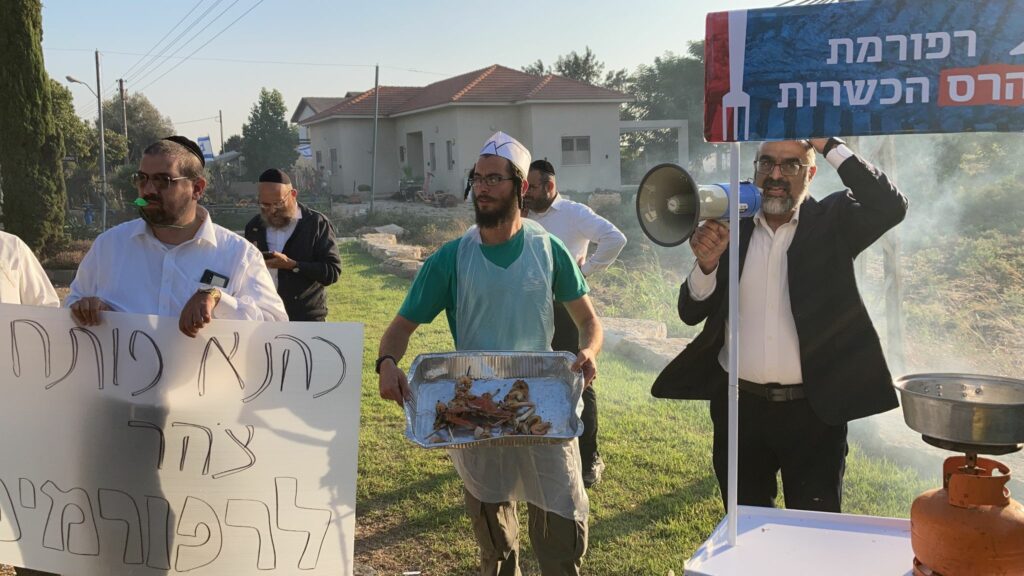 Raising their voice against the controversial kashrus reforms which are expected to be passed in the Knesset in the coming weeks, a group of mashgichei kashrus gathered outside the home of Religious Affairs Minister Matan Kahana, with a unique protest.

Not engaging in any violent protest, the Mashgichim decided to display their discontent with the reforms in a unique and metaphorical manner. The mashgichim fried shrimp and other seafood to make a point about the nature of Kahana’s reform. They also brought mice and rabbits in cages bearing the “kashrus certificates” of Hashgachas Matan Kahana and Avigdor Leiberman.

With respect to the protest staged on Monday, Rabbi Dror Aryeh, one of the organizers of the protest and the head of the Dati Leumi Chazon organization said, “Kahana and Lieberman want to pass reforms that will cause a huge public to be machshil in eating forbidden foods – mamash treifos and neveilos into the mouths of millions of Israeli citizens. They’ll transgress the most chamur issurim in the Torah HaKedosha due to coalition agreements. We’re obligated to thwart this evil law.”