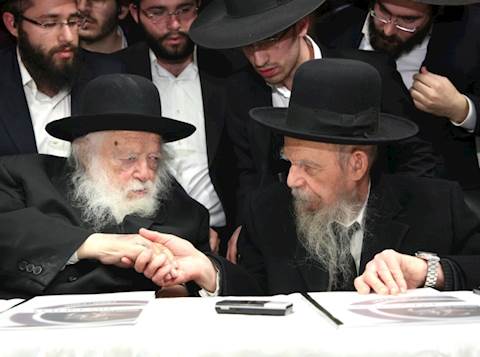 In a strong-worded letter against the Israeli coalition’s plan to desecrate the Kosel, Harav Chaim Kanievsky and Harav Gershon Edelstein urged the lawmakers to reconsider and protect the sanctity of the Kosel.

The scathing letter penned by the two Gedolei Yisrael is quite obviously directed at Matan Kahana, Minister of Religious Affairs, who has endorsed a new layout of the Kosel plaza.

Led with the headline, “U’Partzu Chomos Migdolai”, the letter reads:

“Regarding the terrible rumor that someone from Klal Yisrael has come to destroy and cut off all Kodshei Yisrael, after they have persevered to demolish the walls of kashrus and geyrus, which were built through toil to protect as much as possible, their minds have still not cooled, and they have come to harm the remains of the Bais HaMikdash, the Kosel Hamaaravi, which the Shechina has never abandoned.

We hereby strongly object to the intent to desecrate the holiness of the Kosel by giving space and recognition to those who want to destroy our religion R”L. Their mission is to uproot everything and desecrate the Shem Shamayim Chas v’Shalom.

It is incumbent upon every individual to prevent the disgrace of the makom kadosh, and to strengthen Torah learning and Tefila, so that we can merit to prevent chilul Hashem and bring the coming of Mashiach Tzidkeinu quickly.”