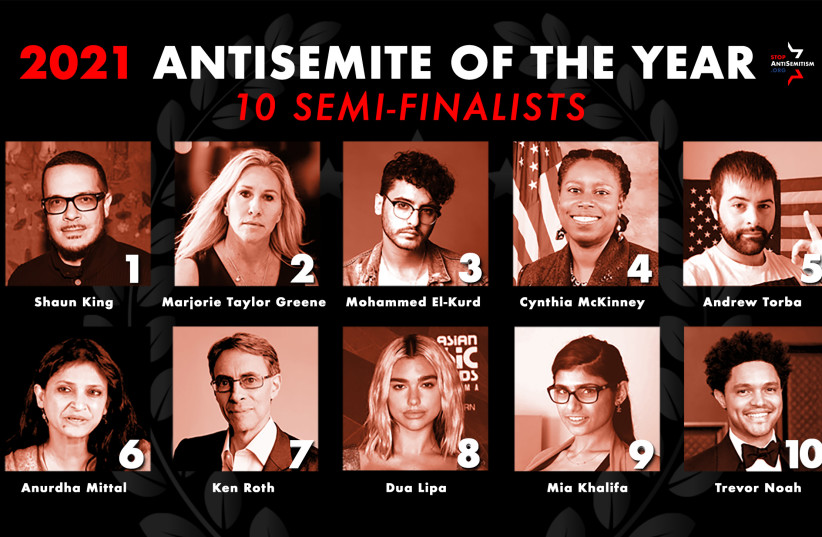 This year’s Antisemite of the Year competition, a project of the watchdog StopAntisemitism, featured numerous hateful individuals, in the first place of which was head of Ben & Jerry’s- Anuradha Mittal.

With 10,000 people voting for her to be featured in the list, Mittal made it to the top of the charts for leading Ben & Jerry’s decision to stop selling its ice cream to Jews living in various parts of Israel, a decision that StopAntisemitism said was “clearly not made for the sake of the Palestinian people who are now also unable to purchase a pint from the Vermont ice cream maker. This is a blatantly antisemitic boycott.”

On the second position came singer and pop star Dua Lipa and on the third was US Rep. Marjorie Taylor Greene (R – Georgia). Lipa constantly shares antisemitic rhetoric to her followers, referring to Israeli Jews as “fake” and claiming the terrorist organization Hamas was an Israeli invention. Dua Lipa’s hateful rhetoric towards Jews became so offensive that a full-page ad was published in the NY Times blasting her, along with her boyfriend’s two sisters – Gigi and Bella Hadid, for Jew-hatred.

Apart from Mittal’s stance on the Ben & Jerry’s boycott, she is also the Founder and Executive Director of the Oakland Institute, a “policy think tank” which falsely accused Israel of apartheid, colonialism and more. She has inappropriately leveraged her status at Ben & Jerry’s to fund antisemitic projects through the Oakland Institute, to organizations like Badil, a Palestinian group with ties to terror organizations and a history of vile Jew-hatred that includes publishing Nazi-era cartoons.

“For us and for the voters, Mittal was clearly the 2021 Antisemite of the Year,” said StopAntisemitism founder and Executive Director Liora Rez. “The Ben & Jerry’s boycott is shamelessly biased, and Mittal’s commitment to promoting her antisemitic and anti-Israel agenda is deplorable.

Rez said that through social media and our other promotional methods, this year’s contest reached millions of individuals online. “We will continue to call out antisemitism wherever and whenever we see it,” she added.