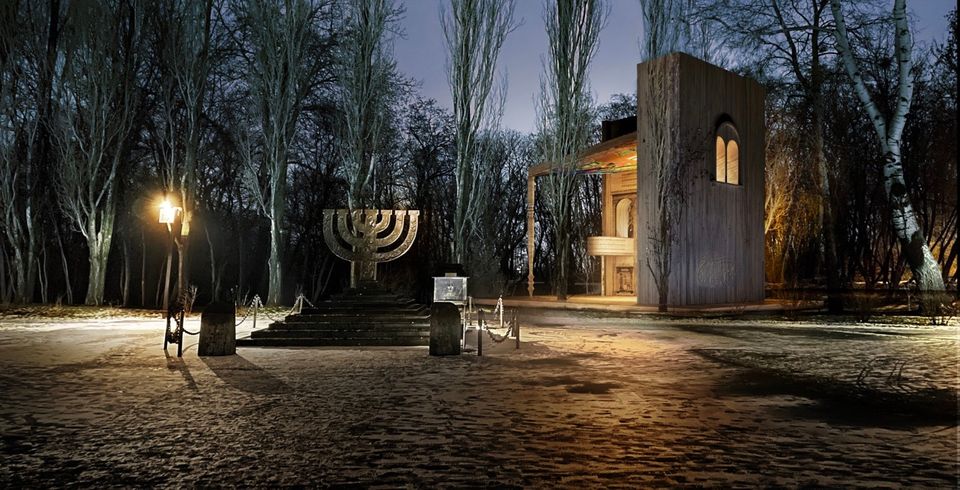 Marking the International Holocaust Remembrance Day this week, the Babyn Yar Holocaust Memorial Center in Ukraine, unveiled the first Jewish prayer space at the place in Kiev where 33,771 Jews were murdered by the Nazis during World War II.

On Thursday, which the world observed as Yom Hashoah, or Holocaust Memorial Day, a synagogue honoring the tens of thousands of victims of the Babi Yar massacre was unveiled. The “symbolic” synagogue was built near the site’s ravine slope, where on Yom Kippur eve in 1941, more than 33,000 Jewish men, women, and children were shot dead during just two days by the Nazis.

The symbolic synagogue structure was inaugurated at a ceremony attended by Ukraine and Kyiv Chief Rabbi Yaakov Dov Bleich alongside nine other rabbis, and addressed by Jewish world leaders and other dignitaries.

According to a statement released by the organization, the new synagogue is just the first of a dozen buildings to be built in the complex, which will be one of the world’s largest Holocaust memorial centers.

“When closed, the building is a flat structure that is manually opened, and then unfolds into the three-dimensional space of the synagogue structure,” the center says in a statement. “The imaginative, one-of-a-kind design also features an interior which references two destroyed 17th and 18th-century Ukrainian synagogues. It forms part of a planned wider multi-faith space for prayer and reflection, to be completed in due course.”

The ceiling of the synagogue is decorated with patterns in the form of a map of the starry sky, reproducing the position of the stars on Sept. 29, 1941. The structure is also decorated with restored paintings, patterns, and texts of prayers, with references to two destroyed 17th and 18th-century Ukrainian synagogues. The Babi Yar project is supported by a number of high-profile figures, including Russian magnate Mikhail Fridman, Ukrainian tycoon Victor Pinchuk and former world heavyweight boxing champion Wladimir Klitschko, as well as the Ukrainian government.

As stated by Rabbi Bleich, “For many years Babyn Yar has had no proper stone or memorial, I find it telling that the first structure of the memorial will be a place for introspection and prayer designed symbolically as a synagogue. This will help visitors relate to the mass murder that took place in Babyn Yar and not forget the spirituality or the origins of those Jews murdered on the eve of Yom Kippur and Yom Kippur itself.”