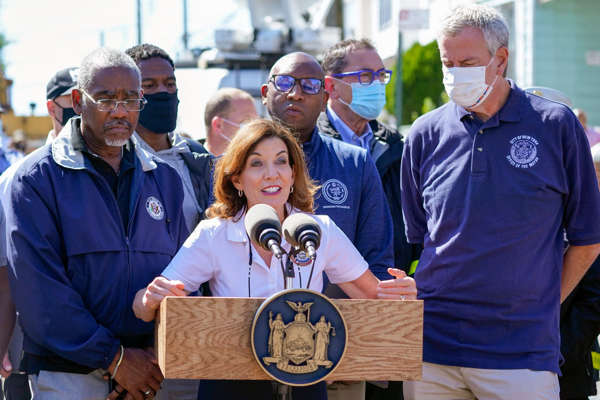 On Sunday, New York Governor Kathy Hochul signed a major disaster declaration of $50 Million, designed to reimburse the state for its storm response once approved by President Joe Biden.

While the figure is much more than what has been capped and quoted, the New York governor said federal officials have gathered enough estimates to start requesting financial assistance. As it stands, President Joe Biden is scheduled to tour some of the hardest-hit communities in New York City and New Jersey on Tuesday.

“I went to those homes, I saw where people lived. I saw how they had no escape route when they lived in a basement home,” the governor said Sunday, talking about the 1,200 homes that have been seriously impacted by the storm. “It was a home, it wasn’t large it wasn’t fancy, but this was their home.” Hochul said the funding would also help New Yorkers displaced and in temporary housing, and those in need of home repairs, unemployment assistance, crisis counseling, and legal services.

Biden has already approved emergency declarations for New York and New Jersey, requests from each state’s governors signed in the immediate aftermath of Ida’s tear through the tri-state. Hochul’s office said the emergency declaration covered $5 million for 14 downstate counties.