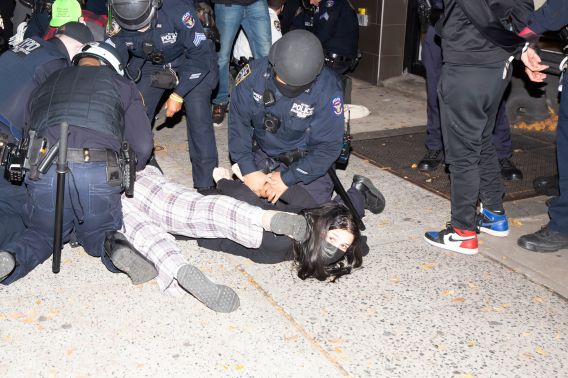 Hundreds Of Rioters Vandalize Brooklyn In Protest Against Philadelphia Shooting

On Tuesday night, various parts of Brooklyn were left destroyed and vandalized after a group of unruly anti-police protesters demanded justice for Walter Wallace Jr., a 27-year-old black man who was shot by the Police in Philadelphia on Monday.

Several marching protesters were arrested in Brooklyn on Tuesday night after clashing with NYPD cops in a raucous anti-police demonstration that mimicked the ones that took place for the second consecutive night in Philadelphia. Causing widespread destruction in the midst of their unruly demand for justice for the armed Wallace Jr., around 200 demonstrators had gathered at Fort Greene Park earlier last night.

As seen in a series of video footage obtained by reporter Issa Khari, protesters vandalized police vehicles, torched an American flag, and ignited at least one rubbish fire during their rally. Near Willoughby and Jay streets, several protesters flung rocks and bottles at police officers, while others in the group wielded pieces of wood.

“Burn the precinct to the ground, every city, every town!” the group, chanted as they marched near Boerum Place and Livingston Street in Downtown Brooklyn. At about 10 p.m. Tuesday the protesters were met by police in riot gear on Atlantic Avenue near Boerum Place.

Amidst the utter chaos, sources also claimed that a man in the crowd stole a pumpkin off the steps of a brownstone and hurled it at a car windshield. One man spray-painted “RIP Walter,” on a building facade, in an attempt to demand justice for the slain man who was shot by two police officers in Philadelphia.

It is being said that the man had mental health issues and refrained from dropping his knife even though the two police officers had warned him numerous times. As his mother ran behind the officers, begging them not to shoot her boy, the police open fired as Wallace disregarded orders and continued to hold the weapon.

In a similar fashion to the Philadelphia protests where rioters looted and destroyed stores, members of the crowd in Brooklyn also broke windows of an Urban Outfitters and Bank of America on Atlantic Avenue in Cobble Hill.

A cop was also injured as a driver charged onto the police when asked to stop. Although the Police ordered the protesters to disperse without causing any further damage, the group paid no heed, which resulted in around 30 arrests last night alone.