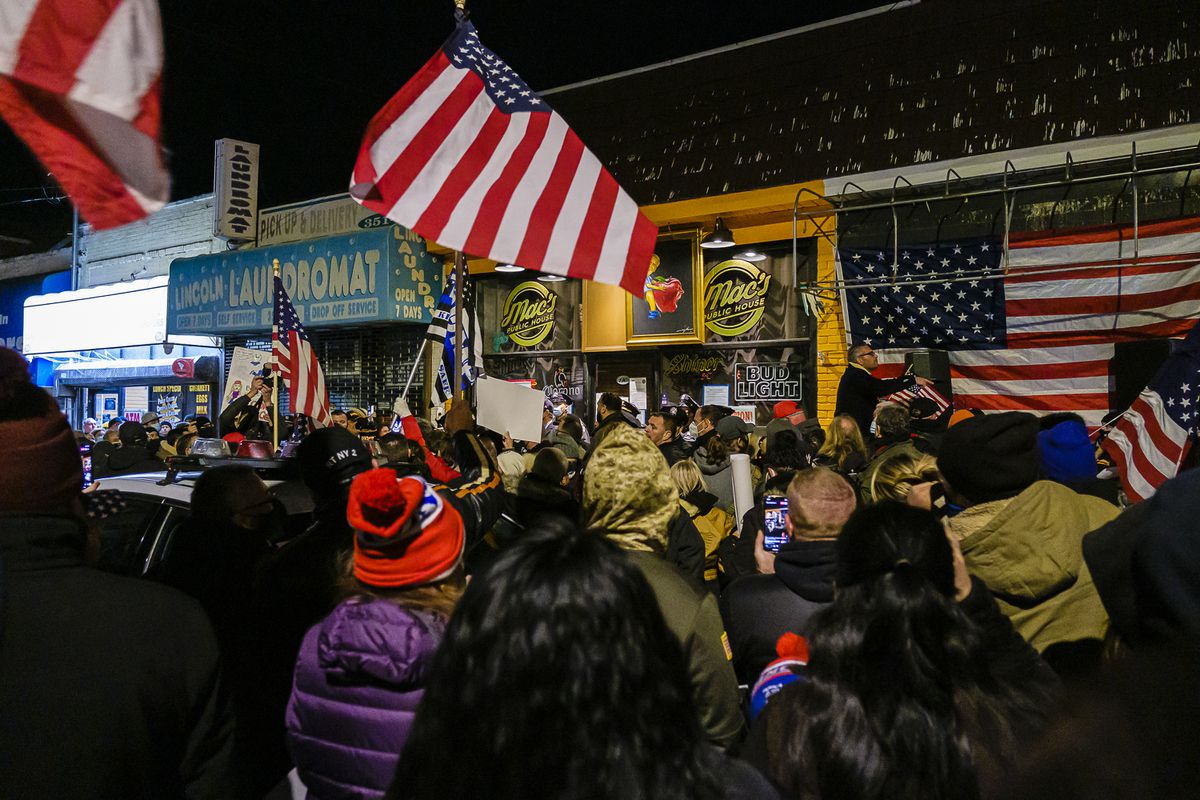 Hurling insults at Governor Andrew Cuomo for imposing stringent restrictions across the state, last night, hundreds of demonstrators, along with members of the ‘Proud Boys’ group protested the closure of a Staten Island bar that had flouted COVID-19 restrictions to remain open.

Mac’s Public House was at the center of controversy since Tuesday, when city sheriffs shut down the Staten Island bar after it declared itself an “autonomous zone” and continued to serve indoor customers in defiance of COVID-19 restrictions, despite its “Orange Zone” status that only allows outdoor dining or takeout.

People in the periphery of the bar had also complained that the joint was operating past the 10 p.m. curfew imposed by Gov. Cuomo’s executive order. Following these events, the state terminated the bar’s license to sell booze last week and arrested its co-owner, Danny Presti, who was not cooperative as officers issued the pub several violations for flouting city and state health orders.

Following the arrest, dozens of angry supporters of the bar paraded towards the establishment as officers with the New York City Sheriff’s Department executed their order. “Free Keith McAnerney now,” the crowd chanted, referring to the bar’s other owner who had been arrested. The angry crowd also yelled, “We’re going to defund the sheriffs!” and vented about Gov. Andrew Cuomo and Mayor Bill de Blasio.

On Wednesday morning, Presti was released with a series of tickets, for obstructing governmental administration, and has also been charged with multiple violations of city and state laws, according to NYC Sheriff Joseph Fucito. Deputies also issued tickets to bartender Yareth Urkonis, cook Matthew D. Soto, and eatery attorney Louis Gerolmino.

Continuing the hard-worded protests on Wednesday night, the entrance of the pub was guarded by dozens of city sheriffs, who were verbally targeted by some of the protesters, including members of the right-wing Proud Boys group.

“I am a proud Western Chauvinist”, said one member, starting to sing Queen’s “We Will Rock You” which led more anti-police protesters to join in the chorus. “Where is your backbone? Where is your morality?” another protester blared at the deputies through a speakerphone.

Although the protests did not take a violent turn, demonstrators chided authorities for their unceasing restrictions on businesses and people.