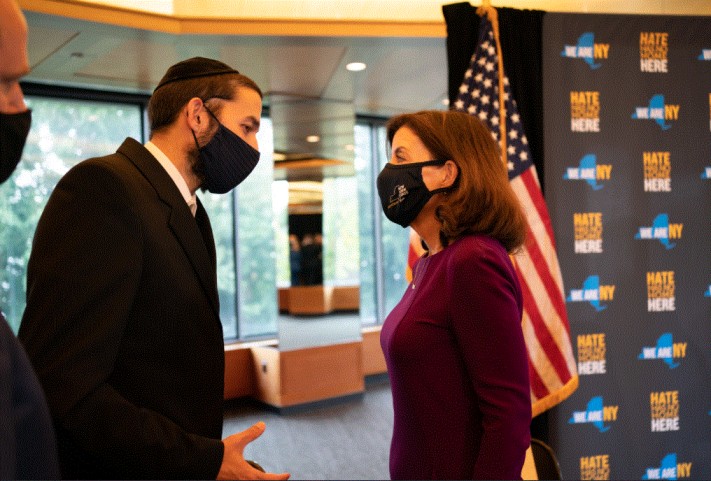 To reduce the number of hate crimes in the United States, New York governor Kathy Hochul has allocated $25 million as additional funds to protect nonprofit organizations against hate crimes.
Hochul announced the great news at the Museum of Jewish Heritage in Battery Park City on Tuesday, where the governor is one of the esteemed guests.

She said the money is a huge help for helping nonprofit organizations improve the security of their facilities to better protect those at risk of hate crimes or attacks because of their ideology, beliefs, or mission.
She added that the funding is available to those organizations that have not previously received state funding for this purpose, the allocation builds on nearly $43 million awarded today to 362 nonprofit organizations to help boost security infrastructure and enhance preparedness against potential hate crime attacks.
“By their very nature, hate crimes strike at the heart of our democratic values and threaten to undermine the very tenets of our society,” Governor Hochul said.
“By helping these nonprofit organizations protect themselves against these cowardly acts of violence, we continue to make public safety a top priority. Bigotry and hate have no place in our state, and we will do everything in our power to protect vulnerable people from those who would lash out against them due to their ideology, belief or mission,” Hochul added.
If implemented properly the money could support 872 projects across the state.
The funding will help bolster security at community centers, schools, museums, and day camps.
Some prominent Jewish personalities in New York praised the directive of Hochul.
Assemblyman Simcha Eichenstein thanked Hochul for the generous allocation of funds for shuls, yeshivas, Jewish daycare centers, and other institutions.
While Assemblyman Eichenstein succeeded in expanding the eligible criteria such as the inclusion of summer camps for security funds, the funds were never released under the Cuomo administration.
“Governor Hochul has now been in office for just a couple of weeks, and you have managed to get the funds out the door. You have prioritized security” Eichenstein said

Eichenstein said the money will greatly help in their fight against hate crimes in New York City.
With the financial help given by Hochul, he called on the Jewish communities to join in their effort against hate crimes in the US.
The latest data has shown that 424 hate crimes were recorded in New York last month.
From this number 147 were targeted against the Jews.
Being the grandson of four Holocaust survivors, Eichenstein also said Jews should take action against hate crimes before it becomes a serious problem in their community.
“The rising number of hate crimes is a wake up call for all of us,”
Eichenstein said people need to realize that the Holocaust did not start in the concentration camps or gas chambers but through small stuff such as vandalism, discrimination, graffiti sprayed on houses, and name-calling.
“Hate crime has no place in world, we should do our best to end it,” Eichenstein added.

The Managing Director of Public Affairs, Orthodox Union Maury Litwack who introduced the Governor to the audience, said Hochul’s directive is a strong indication that she is serious in combatting hate crimes.
“Governor Hochul’s actions today demonstrate her steadfast and strong commitment to combatting hate throughout the state of New York. We welcome this release of security funding and the additional grant funding which will help to protect New York families, communities and institutions,” Litwack said.

In a statement to Yid Info Rabbi Joel Rosenfeld, Director of Government Affairs for Bobov Community who brought this issue to Eichenstein’s attention as soon as he took office in January said
“In 2017 we started to work that summer camps should be able to apply for this grant. In 2019 Assemblyman Eichenstein finally got it done. And the funds were stuck for 2 years. We are grateful that the Governor saw the need and released the funds.”

Reached by phone Rabbi David Niederman, President of United Jewish Organizations (UJO) in Williamsburg said “Unfortunately, our community is under a serious threat of attacks that have already claimed lives. Our institutions anxiously await for the state grants, to better protect our most precious treasures, our children. Thank you Governor Hochul for moving so quickly assuming office to assure that these funds shall be released, and we look forward to seeing that it should actually be put to use to prevent and deter future hate attacks,”

Rabbi Yeruchim Silber Director of Government relations Agudath Israel of America for his part commend Hochul for her directive.
“Agudath Israel has long been in the forefront of battling anti Semitismand all forms of hate. We commend Governor Hochul for her forceful actions today. These funds will with God’s help, go a long way in protecting our vulnerable institutions,” Silber said.

Democratic District Leader from Borough Park David Schwartz who attended the Governor’s announcement today said “Today’s announcement by Governor Hochul is great news to tens of thousands of parents sending their children to yeshivas and camps, who are worried of their vulnerabilities to hate attacks. Thanks to these awards, they can now feel the peace of mind that their children will have an additional layer of protection.”

Aside from the funding, Hochul also announced an expanded online reporting form that will allow New Yorkers to report bias and hate incidents occurring in New York State.
The new online reporting form improves data collection capabilities and bolsters the state’s efforts to track and respond to acts of hate and discrimination.
The governor made the directive as hate and bias incidents continue throughout the state, many targeting Jewish and Asian American and Pacific Islander communities.
Experts said while the number of hate crime incidents reported to police in the state represents a small fraction of total crime, these incidents are significant because they instill fear in the greater community of the victim.
New Yorkers who are the victims of hate or bias incidents or who witness such incidents can use the new online form to report detailed information about the incident to the New York State Hate Crimes Task Force. Submissions through the form are monitored by the New York State Police and the New York State Division of Human Rights, which may follow up to determine whether a crime or an act of discrimination in violation of the New York State Human Rights Law has occurred.
The updated form collects information about the location, time, and nature of the incident, as well as the suspected bias motivation. Individuals using the form also have the option to provide additional information, including photographs, videos, or documents relating to the incident.
The old version of the Hate Crimes Task Force’s online reporting form did not collect a standardized set of data about each incident, and the new form will allow the Task Force to develop a more comprehensive picture of hate and bias incidents in New York State.
The new form is accessible on mobile devices and is available in English, as well as the ten languages covered by the recently expanded statewide language access policy: Arabic, Bengali, Chinese, Haitian Creole, Italian, Korean, Polish, Russian, Spanish, and Yiddish.
Sources reveal that this fall, the Division of Criminal Justice Services will seek proposals for the $25 million, which is expected to fund approximately 500 projects across the state. Nonprofit organizations that previously received grants may apply for a new grant to bolster security at different facilities.
DCJS will accept applications for up to $50,000 per facility; each eligible organization may submit up to three applications for a maximum of $150,000. In addition, individuals who have been the victims of hate crimes can receive direct services, such as counseling, civil legal assistance, safety planning, advocacy, emergency shelter, and transportation, from a network of 212 victim assistance programs funded by the State Office of Victim Services.

Assemblyman Simcha Eichenstein with Governor Hochul after the announcement

Scott Richman, Director of the ADL in NY and in NJ with Lieutenant Governor Brian Benjamin

District Leader David Schwartz in a conversation with Governor Hochul