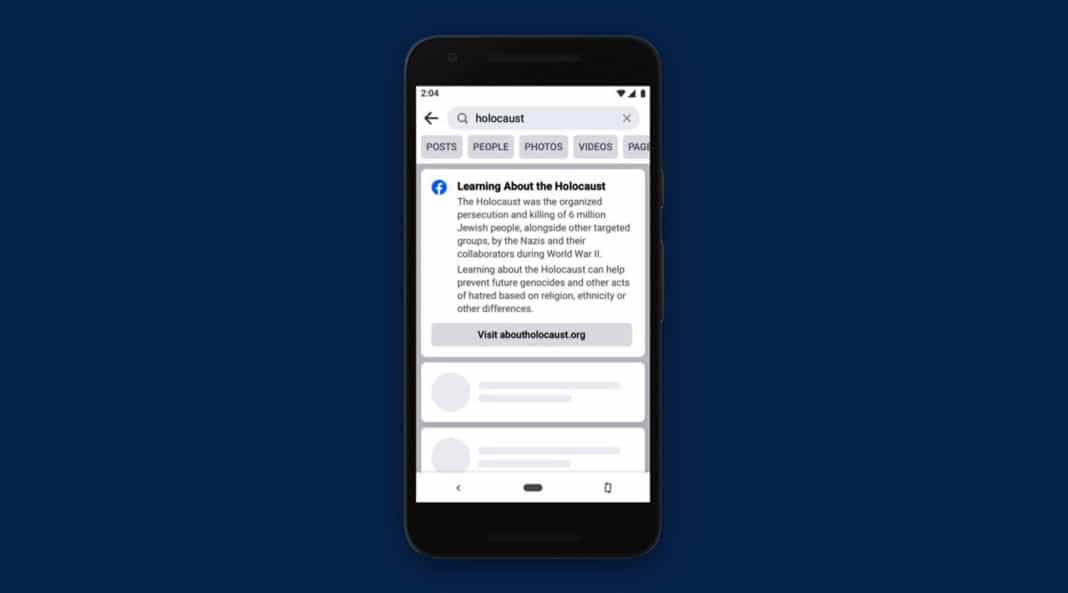 In Move To Combat Holocaust Denial, Facebook To Connect Users To A Fact-Checking Site

On Wednesday, in observance of the International Holocaust Remembrance Day, Facebook announced that it will now begin to connect users to a site with detailed and verified facts about the 20th-century atrocity that killed 11 million people, including 6 million Jews.

In an effort to combat Holocaust Denial- which the company has been criticized for failing at previously- Facebook commenced this initiative on the 76th Anniversary of the liberation of the Auschwitz death camp. In a statement online, the social media giant wrote, “We honor the memories of the victims and recognize the role we can play to help fulfill the promise ‘Never Again.’ Starting today, we will begin to connect people with authoritative information about the Holocaust. Anyone who searches on Facebook for terms associated with either the Holocaust or Holocaust denial will see a message from Facebook encouraging them to connect with credible information about the Holocaust off Facebook.”

The new tool will lead users to the website aboutholocaust.org, which was created by the World Jewish Congress with the support of the U.N. Educational, Scientific and Cultural Organization, or UNESCO. The site includes easy to read facts about the Holocaust and survivor testimonies, reviewed by leading experts in the field of Holocaust studies.

The tool has been first made available in English-speaking countries, including Australia, New Zealand, Canada, United Kingdom, Ireland, and the United States. It will be available in more languages and countries over the coming months, according to the social media platform.

In a statement, reacting to the move was Ronald S. Lauder, President of the World Jewish Congress, who said, “Holocaust denial, Holocaust distortion, and the spreading of conspiracy myths about the Holocaust generally have become cornerstones in the vicious incitement of antisemitic hatred on the part of white supremacists, neo-Nazis, and other extremist forces. The World Jewish Congress is deeply gratified to work with UNESCO and Facebook to ensure that Facebook’s 2.7 billion users are provided with accurate, comprehensive information about the Holocaust. Connecting Facebook users to AboutHolocaust.org will contribute greatly to promoting tolerance and empathy as the antidote to resurgent antisemitism, xenophobia, bigotry, and hate.”