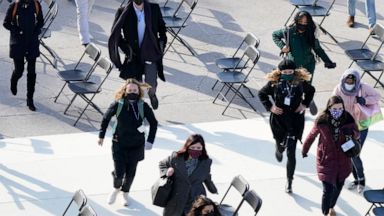 Inauguration Rehearsal At Capitol Evacuated Due To Fire At Nearby Shelter

On Monday, during a rehearsal for President-elect Joe Biden’s inauguration which is slated to happen tomorrow, the US Capitol complex ended up being temporarily locked down after a fire in a homeless encampment roughly a mile away sent a plume of smoke into the air and caused security concerns in the nearby area.

Amidst fears of another potential attack or unrest, the smoke that erupted triggered a false alarm at the Capitol, which briefly interrupted the rehearsal for Wednesday’s inauguration ceremony, a quadrennial exercise in which stand-ins assume the roles of Biden and other VIPs and the U.S. Marine Corps Band goes through its paces, including practicing “The Star-Spangled Banner.”

The rehearsal resumed not long afterward, accompanied by frequent passes by a helicopter patrolling the skies over the Capitol. Law enforcement officials said there was no threat to the public and the fire was not believed to be a threat to the inauguration. Local firefighters put out the blaze quickly. The evacuation of some participants and the lockdown were ordered by the acting chief of Capitol Police in an abundance of caution, officials said.

After the Capitol siege tat claimed 5 lives on January 6th, the U.S. Secret Service tightened security in and around the Capitol a week early in preparation, and the city center is essentially on lockdown with streets blocked, high fencing installed, and tens of thousands of National Guard and other law enforcement officers stationed around the area.

Capitol Police spokeswoman Eva Malecki said there were currently no fires on or within the campus. “Members and staff were advised to shelter in place while the incident is being investigated,” she said in a statement. Participants were ushered from the West Front of the Capitol. Those who had gathered for a walk-through, including a military band, were directed to head indoors and moved in the direction of a secure location inside the Capitol complex. People involved in the rehearsal said security officials yelled “this is not a drill.” The lockdown was lifted about an hour later.

President-Elect Joe Biden is set to take place on Wednesday, the 20th of January, and the ceremony will see the likes of several dignitaries, excluding President Trump, who will not be attending.