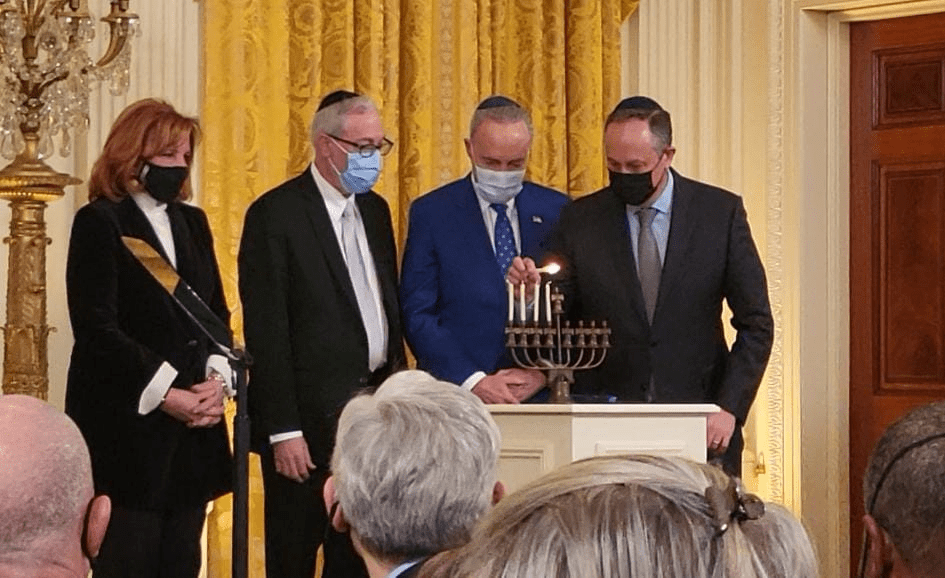 Exclusive: Inside The Chanukah Celebrations At The White House

As tradition goes, this year, the celebration of Chanukah at the White House was held on Wednesday and attended by top dignitaries including President Joe Biden, Vice President Kamala Harris, and their spouses.

With the first Jewish spouse of a vice president, second gentleman Doug Emhoff, joining in lighting the menorah, the “family” celebration hosted 150 guests, including Jewish community leaders, Cabinet members, lawmakers, and the new Israeli ambassador to the U.S., Michael Herzog.

The guests, all wearing masks, sat beside each other in the East Room for the event, which did not include the customary reception of food and drink afterward, due to the looming threat of the Omicron variant. Instead, guests were given individually decorated and wrapped cookies prepared by the White House kitchen to mark the holiday as they left the presidential residence.

The menorah chosen for the occasion was the Liberty Bell menorah, designed by Holocaust survivor Manfred Anson. It is on loan to the White House from the National Museum of American Jewish History.

While lighting the menorah alongside Senate Majority Leader Chuck Schumer and other Jewish leaders Emhoff said, “our history, our values as Jews, are an essential part of who we are as Americans. Jewish values are American values, and I believe this deeply.”

Meanwhile, Biden in his short address to the guests claimed, “This is a White House tradition, but for the first time in history it is a family tradition…The Hanukkah story provides a powerful lesson and nourishes the wellspring of hope. In darkness there’s light. In cynicism there’s hope, and optimism, and the unyielding belief that miracles are possible.”

Talking about the recent spate of antisemitic acts, Biden said,  “The veneer of civilization is paper-thin. We are its guardians and we can never rest. Well, it’s paper-thin and we are its guardians. All it takes is an opening — a silver, a crack, the briefest nod of acceptance or legitimacy — for ancient evils that long plagued our society to come rushing in.”

Borough Park’s Democratic District Leader David Schwartz, who was one of the very few Hasidic jews to be invited to the event told Yid Info “It felt surreal to be present when the menorah was lit in the most important room, with our president, and having a Jew from Brooklyn (Senator Schumer) in one of the most important leadership positions light a candle, and have the President speak about his late Dad, Abe. Said Schwartz, “As a Hasidic Jew, being present, it symbolized to me the long way we have came in the past 70 years. This is a miracle, b’zman hazeh.”

.@DavidSchwartz48, a district leader of the Brooklyn Democratic Party, stood out as probably the only member of the Hasidic community in New York, invited to the event pic.twitter.com/oSyL6xZdGy

There are also White House yarmulkes for the crowd pic.twitter.com/gfNN8Wpu8x