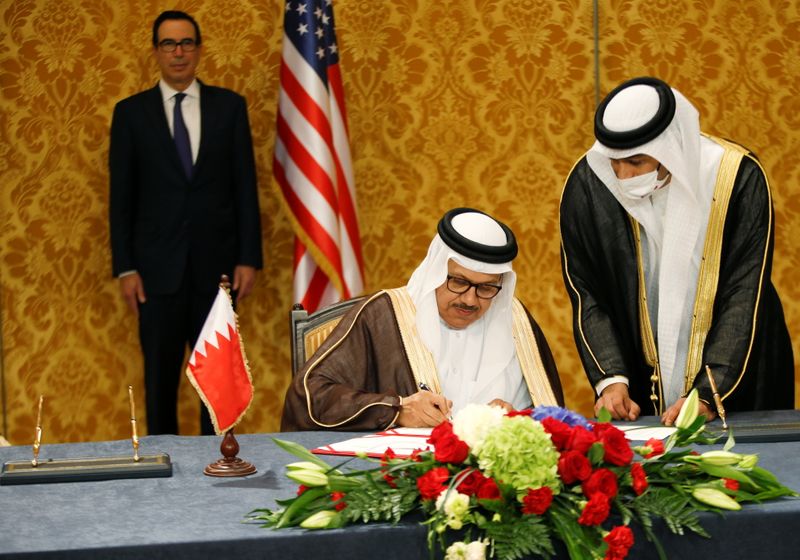 Israel-Bahrain Ties Formalize at A signing Ceremony in Manama

After an Israeli and US delegation visited Manama on Sunday, Bahrain and Israel formalized its relations in a signing ceremony to broaden the cooperation that the Trump administration has promoted as an anti-Iran stand, along with a potential economic boost.

Post the signing of the historic Abraham Accords between UAE, Bahrain, and Israel at the White House on September 15th, this Sunday saw another iconic deal between Israel and the Arab country. Bahrain is now the 4th Arab country to have normalized ties with Israel under the backdrop of Palestine trying to claim a nation of its own, owing to which the Arab Treaty was signed in 2002.

The Israeli delegation was accompanied by US Secretary of the Treasury Steven Mnuchin since the US is behind brokering all of the recent ties. Although the Bahraini population has condemned the move, the government of the nation has professed that the deal protects its interests from Iran.

After the signing ceremony, Bahraini Minister for Foreign Affairs Abdullatif al-Zayani said “It was indeed a historic visit, to start opening relations between both countries.” Al-Zayani touched elbows with Ben-Shabbat, who described the step as a “promising beginning” and said the Israeli delegation was accepted “with open arms, with warmth and cordiality”.

As reported by Al Jazeera, Al-Zayani said engagement and cooperation were the most effective and sustainable ways of bringing about genuine and lasting peace in the region and said his country supported resolving the Israeli-Palestinian conflict through dialogue.

The various MOU’s signed at the event included those that surround trade, air services, telecommunications, finance, banking, and agriculture, among others. Whilst it is anticipated that many other Arab countries may follow suit, Saudi Arabia has been vocal about the decision to not follow the UAE and Bahrain’s footsteps in ‘back-stabbing’ the palestinians.

Tomorrow, that is the 20th of October, Israel and the UAE will sign a deal to allow 28 weekly commercial flights between Tel Aviv’s Ben Gurion airport, Dubai, and Abu Dhabi, Israel’s Transportation Ministry said on Sunday.