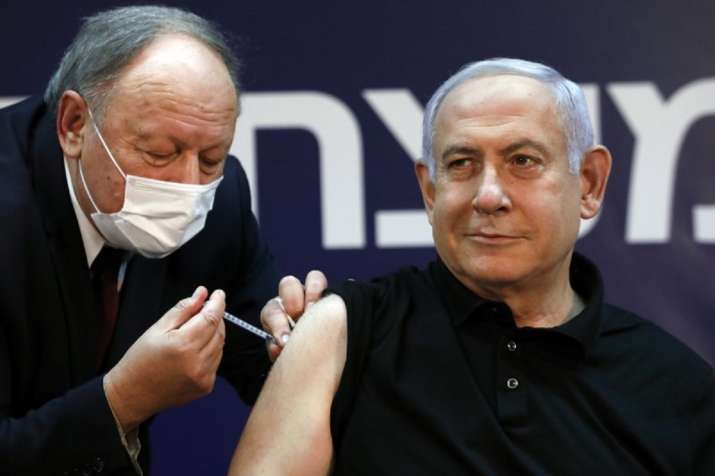 On Thursday, Israel hit an all-new milestone of inoculating 2 million people with the first dose of the Pfizer-BioNTech coronavirus vaccine, as the country pushed forward with the national vaccination drive amid record daily infections and a stringent national lockdown.

Celebrating the 2 Millionth dose which was administered on a kindergarten teacher from the central city of Ramle, Prime Minister Benjamin Netanyahu and Health Minister Yuli Edelstein, both of whom have received the second dose, were present at the Maccabi Healthcare Services clinic in the city. “It’s already become routine… It’s something we’re happy to grow accustomed to, but mostly we want to finish this,” Netanyahu said. “We’ll continue — to the next million.”

The prime minister said the government was working on rolling out the “green passports,” which will grant those vaccinated or who have recovered from COVID-19 access to certain gatherings and events that are currently banned. Netanyahu further urged Israelis to adhere to government-mandated virus restrictions and said no decision had yet been made on extending the third nationwide lockdown which is slated to expire on the 21st of January.

Despite being the highest per capita vaccine administrator, Israel has continued to see a sharp surge in both- COVID-19 cases as well as fatalities from the infection. As much as over 9,000 daily new infections have been diagnosed in recent days, and researchers claimed serious cases were expected to significantly increase in the coming days and peak by the end of January, with the rollout of the vaccine yet to have a noticeable impact on morbidity.

Meanwhile, the World Health Organization’s European branch on Thursday said 95 percent of vaccine doses so far administered worldwide were limited to 10 countries, including Israel, and called for more equitable distribution. According to the WHO, in terms of total doses, the top countries are the US, China, the UK, Israel, United Arab Emirates, Italy, Russia, Germany, Spain, and Canada.

“Collectively, we simply cannot afford to leave any country, any community behind,” WHO’s regional director for Europe, Hans Kluge, said at an online press conference. Kluge said the WHO was working to get the vaccine to every country but, “it needs every country capable of contributing, donating and supporting equitable access and deployment of the vaccines, to do so.”