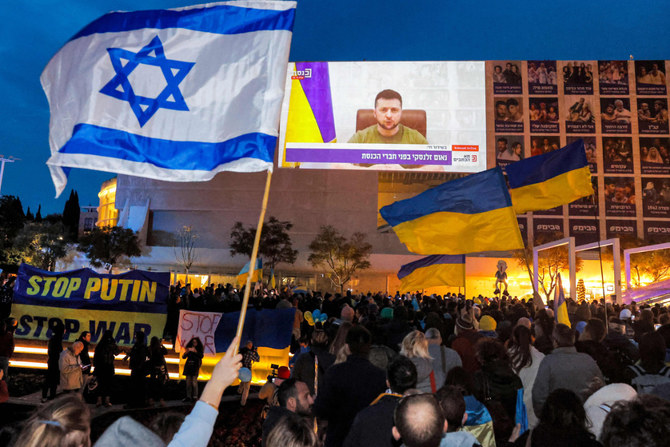 Chanting ‘Glory To Ukraine’ in unison, thousands of Israelis attended Ukrainian President Zelensky’s address to the Knesset, which was broadcasted live at the Habimah Square.

The crowd filled the square with blue and yellow, the color of the country’s flag, and shouts of “Slava Ukraini” – “Glory to Ukraine.” Sounds of Ukrainian and Russian speech were heard as much as Hebrew, perhaps more, and among the attendees were a sizable number of recently arrived refugees who fled the war, many with relatives in Israel.

Speaking to the Times of Israel, Russian-born Alex said, “I love Russia, but what has happened is terrible. We must stop it.” He said none of his Russian relatives, friends, or colleagues in Israel have sided with Putin. Asked why he said it was because they were not watching the propaganda on Russian television.

A pair of Israelis who had no ties to Ukraine stood out from the crowd stood out because 10-year-old Itai wore his Purim costume, a black box that had bars like a prison cell. It was labeled “PUT IN JAIL.” His father, Omer, said they had come at Itai’s request to protest what was happening in Ukraine. But coming to Zelensky’s speech, Omer found it “A bit aggressive toward Israel.” He told the outlet, “We understand his distress and also think Israel should do more for Ukraine. But the comparison to the Holocaust was uncalled for and may have undermined his speech.”