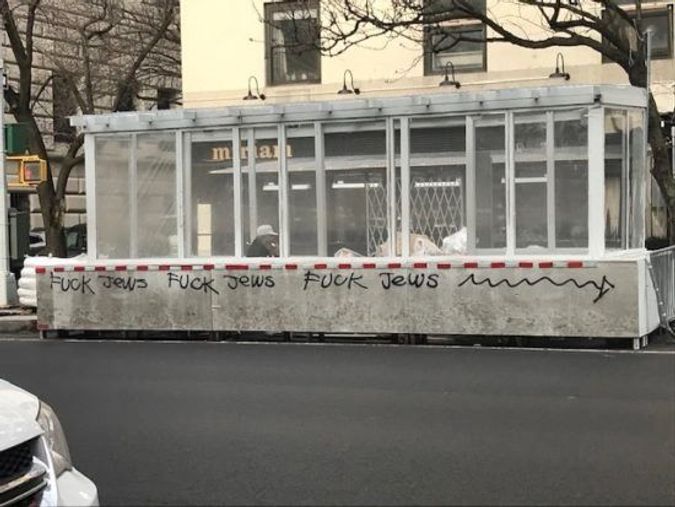 Miriam, an Israeli-inspired restaurant located in New York’s Upper West Side, was the recent site where antisemites had their way with despicable graffiti that read ‘F—k Jews’, written multiple times.

Speaking to the media on Wednesday Rafi Hasid, the owner of the restaurant said, “As my mother would say, it’s not the end of the world, but it’s not nice.” Diners arriving for lunch were greeted by the site of an NYPD patrol car outside the restaurant, along with the words “F— Jews” scrawled three times in large black letters.

Source: The Forward (By West Side Rag)

Asked what measures he would take to protect his restaurant from vandals in the future, Hasid was blunt. “There’s not much I can do if someone comes in the middle of the night to put graffiti,” he said. A native of Petah Tikva in Israel, Hasid emigrated to the US 22 years ago. He said that he had experienced antisemitic harassment at his other restaurant in Brooklyn, including telephoned death threats and insulting emails. “One email I got said that the food tastes like the occupation, free Palestine,” Hasid recalled.

Local leaders condemned the vandalizing of Hasid’s restaurant, among whom was State Sen. Brad Hoylman, who represents a nearby district in the Albany Senate. He posted on Twitter, “When you see antisemitism, you have to call it out.”

Manhattan Borough President Mark Levine also denounced the “disgusting” graffiti, adding, “We must condemn this hatred everywhere it emerges. We can’t accept this as normal.

New York has seen a sharp rise in antisemitic incidents over the past month, leading to the Jewish community living in fear of what tragedy may befall them next.