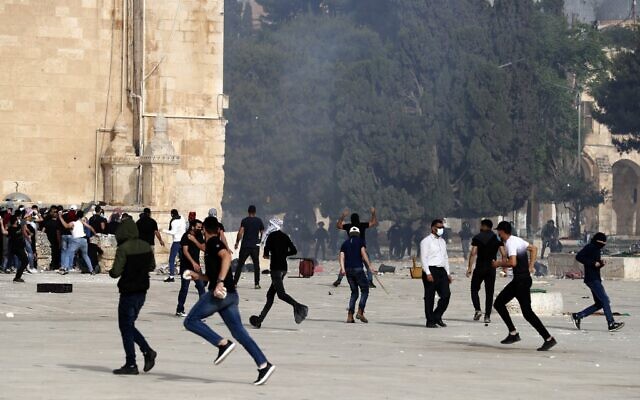 After the attacks on Jerusalem over the weekend, on Monday morning, the Israeli police decided to bar Jews from entering Jerusalem’s Temple Mount holy site on Jerusalem Day. On Sunday, the fierce clashes between Palestinian protesters and police in Jerusalem wounded 25 people and resulted in 23 arrests.

As reported by local Israeli media outlets, major clashes began in the morning at the Temple Mount, as police entered the compound after thousands of Palestinians gathered there overnight, collecting rocks and other makeshift weapons. Officers were attacked and responded with stun grenades, police said. Police added that dozens of rioters were hurling rocks from the Temple Mount to a road south of the compound, blocking the road but causing no injuries or damage. Reports also suggested that the police were set to also rule on whether to allow a planned celebratory parade by nationalist Jews, amid warnings from security officials that the Flag March could lead to a further escalation in violence.

“After a security assessment which concluded a short while ago… the police commissioner [Kobi Shabtai] decided at this stage not to hold visits within the Temple Mount,” police said in a statement Monday morning, referring to the entry of Jews. Jews are usually allowed to visit the compound on certain hours on weekdays, under numerous restrictions, but not to pray there. Furthermore, Jews have been barred from entering the site in recent days amid the tensions, which coincide with the end of the holy Muslim month of Ramadan.

The holy site of Temple Mount remains to be a contentious location since it is revered by both- the Arabs and the Jews.  The site is the home of the Al-Aqsa Mosque — the third holiest site in Islam — and is revered by Jews as their holiest site as well.